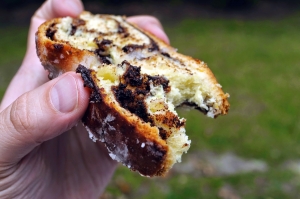 There are lots of baked goods traveling under some variation of the name babka, and accordingly, lots of theories about how the name came into being, and lots of recipes that don’t entirely look like each other. They come from Poland, the Czech Republic, the Ukraine, Russia, France, Spain, Italy, and none of them are quite what we’d call babka.

You know the one I’m talking about. The babka of Seinfeld fame and New York extraction: thin layers of yeast-raised dough cradling swirls of dark chocolate, butter, and sugar. The babka that’s so associated with old Jewish bakeries, even though it’s a recipe that isn’t particularly old or particularly Jewish (at least, not any more or less Jewish than New York City as a whole).

But, as usual, I’m getting ahead of myself. Let’s start with the story of the babka as it’s typically told.

Both the loaf of Seinfield fame and its European cousin are yeast-raised, butter-enriched loaves that exist halfway between dessert and breakfast food. And there’s no question that the American loaf is the younger, sexier cousin. 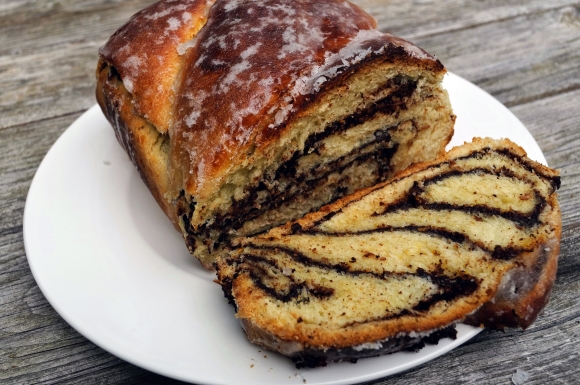 There are basically two stories told about the origin of the babka. One is that the name is a corruption of a word a few Eastern European countries use to mean an older woman or grandmother, that the babka was originally tall, and that the fluted pans used to create one looked like the pleats of a grandmother’s skirt. The other is that it’s derived from the baba au rhum.

Either one of these could provide the origin point where cake-like sweet baked goods could earn the name babka, but neither one describes a baked good anything like the chocolate babka we know and love here. The Eastern European babka is an Easter bread that has more in common with a panettone than anything familiar to Jerry or Elaine.

Even early domestic mentions of babka describe entirely other dishes. Consider this gritty soufflé sort of thing from the August 27, 1927 edition of The (Indiana, Pennsylvania) Evening Gazette:

A 1960 mention takes on shades of the baba au rhum with a rum-flavored syrup soaked in and repeats the “women’s skirt” theory of the name evolution. From the December 23, 1960 edition of The Logansport (Indiana) Press:

The only way the loaf-shaped chocolate babka would remind anyone of their grandmother’s skirt is if it was named by Spongebob Squarepants. 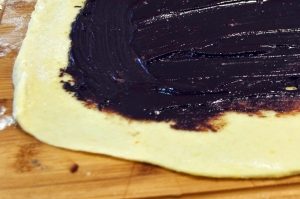 At the same time, both the loaf of Seinfield fame and its European cousin are yeast-raised, butter-enriched loaves that exist halfway between dessert and breakfast food. And there’s no question that the American loaf is the younger, sexier cousin.

How can you tell? Chocolate. Until the 1880s, the process of conching chocolate — that is, grinding it over and over to produce a smooth and even texture — didn’t exist. Chocolate in solid form was gritty, and as a result, it was primarily a drink. Even then, affordable chocolate for the masses didn’t show up until the 20th century. 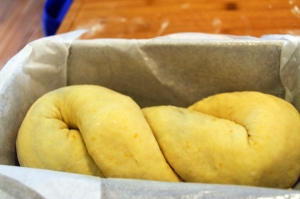 Plus, as we’ve already seen, nobody in the U.S. seemed to have any awareness of a recipe for babka until the 1940s, and even then, these were European-style babkas. The earliest mention I’ve seen so far of something that clearly describes itself as a chocolate babka is from a Giant Markets ad from the May 5, 1966 edition of The (Stroudsburg, Pennsylvania) Pocono Record:

Which raises the question: given that its cousins traveled under the banner of Easter Bread and Christmas Bread (in its “au rhum” iteration), how did the chocolate babka end up a specialty of Jewish bakeries? Even Claudia Roden’s (James Beard Foundation Cookbook of the Year) 1998 tome The Book of Jewish Food has 600-plus pages, 800 recipes, and not a single mention of the existence of babka.

I think the most likely explanation is that the immigrants who came to develop our chocolate babka arrived from Eastern Europe sometime around or just after World War II, and it’s not unreasonable to think that many of them were of the Jewish faith avoiding persecution. So when the babka came to the land of abundant and cheap chocolate — remember, Hershey’s had wartime contracts that ended up giving a nation a taste for their product — they incorporated what they found in New York.

So there it is. The chocolate babka: an American original. And since you’ve been so patient, here’s the clip you were waiting for all along. 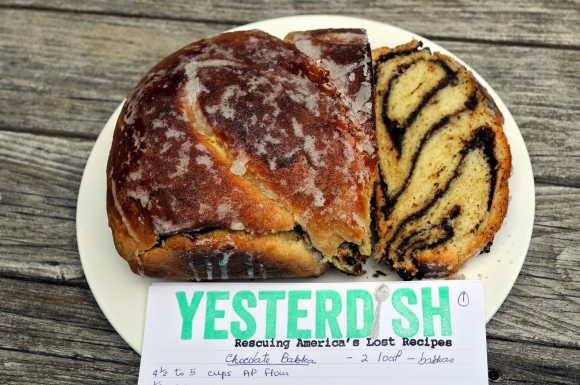 Mix in a mixer with dough hook about 10 minutes. You want a smooth, shiny dough.

Oil a plastic bag’s interior (I use baking spray). Put the dough in; zip it and let it rest in the fridge overnight.

Make the “Filling.” We have a tree nut allergy so nuts are omitted, but you can add nuts that are chopped and toasted to your filling.

Divide the dough that was resting in the fridge in half. Flatten each piece into an 18 by 10 inch rectangle with the long edge parallel closest to you.

Spread 1/2 of the melted and cooled filling on one rectangle, leaving a one inch border clean. Starting with the edge away from you, rolling toward you, roll the dough and filling into a tight cigar toward you. Pinch the ends to seal them.

Make one large ring and then twist twice, making a double figure eight. Put in the prepped loaf pan and egg wash.

Bake about 40 minutes until they sound hollow when tapped.

When ready, take them out of the oven and brush with syrup. Let them cool enough.

moderate oven
Usually, 350 to 375 deg. F.
compressed yeast
Exactly what it sounds like--a fast-acting, longer-lasting not-quite-dry cake of active yeast. If you prefer dry yeast, like most home bakers, substitute 2 and 1/4 teaspoons of dry yeast for each cake of compressed.