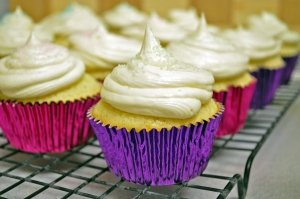 Before I get into this week’s recipe, I want to wish my wonderful mother a happy Mother’s Day. This blog exists because Adam and I grew up watching her cook. (And helping. We still end up the lowest-paid commis in the world when we visit. — Adam) We learned to love food and tradition because of her. We’re both so thankful for that, and so many other things. Happy Mother’s Day mom!

And now back to our regularly scheduled recipe, vanilla cupcakes!

I know, I know. Hide your paper liners and put away your sprinkles, cupcakes are so over. I’ve read it everywhere. People remind me of it all the time, like they’re telling me a relative died. “Did you hear–” they lower their eyes and shake their heads, “cupcakes are over.”

If we were eating toast, I’d totally be team butter, but we’re not. We’re making cupcakes. And cupcakes should taste like cupcakes, not butter.

I mean, they really are the perfect party dessert. Cupcakes are easier to frost than a regular cake, they don’t require plates and forks, no one has to stand around trying to cut “just the tiniest piece” for everyone, and you can easily offer different frosting options for people (sprinkles!). Best of all, when done right, cupcakes are better than cakes. They are lighter and fluffier and more fun. 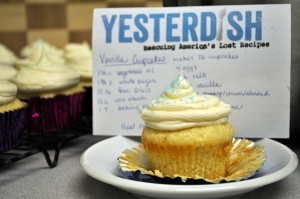 So, now that I’ve sold you on cupcakes, it’s important you remember one very important rule about making cupcakes: cupcakes should be made with oil, not butter.

I know you’re thinking, “but Dori! Flavor! Butter tastes better!” True. And if we were eating toast, I’d totally be team butter, but we’re not. We’re making cupcakes. And cupcakes should taste like cupcakes, not butter.

Cupcakes should also be light and fluffy little cakes – lighter and fluffier than actual cakes because cupcakes don’t have to support layers and layers of frosting and cake. And oil makes lighter, better cupcakes that stay moist longer. Cupcakes made with butter have a finer crumb, but they tend to be much denser and, oddly, can be oily.

But maybe you’re thinking, “but Dori! Health! Butter is better for you!” I mean, is it? I don’t know. I’m not a nutritionist. I feel like neither is that great for you? We’re dealing with cupcakes, not carrots though… so maybe you should look elsewhere for your health foods. Like to carrots.

If you do insist on using butter for your cupcakes (lame), please at least use a recipe that calls for butter. It is not okay to just sub butter for oil in cupcake recipes. The ingredients have to be combined differently. I could tell you how, but I’m not going to because you should just use oil. (I’m not a dessert guy, but my guess: standard butter is about 80% oil, 16% water, and 4% milk solids. So you need to use a quarter more butter than oil and reduce other dairy by the added volume of butter. — Adam)

(Note: Other baked goods, like cookies, may do just fine with butter. This discussion is limited to cupcakes.) 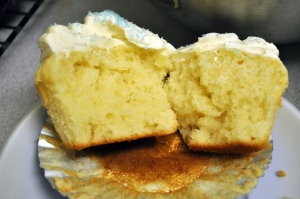 Another thing you might notice about this recipe is the epic amount of cornstarch. It’s a little bit crazy. Usually, you would replace two tablespoons of regular flour with two tablespoons of cornstarch to approximate cake flour. It lowers the protein content of the flour so it develops less gluten. Less gluten gives you a more tender cupcake. Even more cornstarch means even less gluten which gives you an even more tender cupcake! YAY! (A word of warning though: while I’ve heard of recipes that are 50/50 flour and cornstarch, I wouldn’t go much beyond the recipe here. At some point, it will make your cupcakes taste weird and fall apart completely. No bueno.)

This recipe uses sour cream, but you can sub in yogurt if you’re so inclined. I prefer recipes that have some kind sour cream/yogurt/buttermilk component because it gives the cupcakes a buttery texture. (Note that I said “texture” and not “flavor.” Because we aren’t using butter in cupcakes, are we? Are we?)

In a large bowl, combine oil and sugar. Beat with a hand mixer until they combine. Add eggs and vanilla. Beat for 1-2 minutes until the mixture is smooth.

Add dry ingredients to wet with three additions, mixing for one minute each time. Mixture should be thick, like brownie batter. Add sour cream. Mix for two minutes.

Bake in ungreased and lined cupcake tins for 16-18 minutes.