It’s a good thing you don’t actually eat with your eyes. 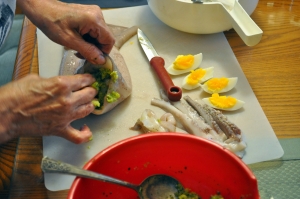 I love eating calamari–especially well-prepared, tender, fresh, flavorful calamari, the kind where a kiss of lemon juice and a sprinkle of salt are the indispensable accompaniments that hundreds of years of experience have yet to surpass. I love it broiled and fried and even stuffed.

But I would be lying if I said I didn’t experience a bit of squeamishness when it comes to actually handling them raw. I confess this hypocrisy partially to absolve my sister of hers–Dori is squeamish when it comes to carving up large pieces of meat, while I hum through the task with something between enthusiasm and ghoulish delight. But not with calamari. Left to my own devices, I’ll eye the calamari in the fish case at the supermarket, then come up with some excuse to make something else.

A stark contrast to my mother and grandmother, to be sure. But they grew up on the Red Sea. I grew up on Lake Erie.

You’re already forgiven if you choose not to make this; I understand that not everyone is eager to dive head-first into sea monsters.

My mother talks about cleaning and eating squid the way coastal Italians used to on a regular basis, in the days before every shoreline became a resort–catching them, cleaning them in the ocean, beating them on the rocks with salt, and eating them raw. But again, that was the Red Sea. If you pull something out of the water in Lake Erie, it’s as likely to be Howard the Duck as it is to be edible. 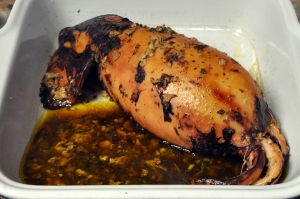 My grandmother (who is the one who demonstrated this recipe for us) remembers this kind of stuffed calamari as being a frequent visitor to the table on Christmas Eve. Until 1983, Catholic canon specified that Christmas Eve was a vigilia di magro, a day of abstinence from meat. The tradition of eating seafood on these days actually goes back to the Middle Ages, when the church had, through various observances connected with saints, declared that almost half of the days of the year required abstinence from meat. Under that kind of a rule, it’s not too hard to reach a consensus that everybody can have shrimp and cod whenever they like.

In Southern Italy, they observed this practice with the added tradition of eating a variety of seafood dishes, usually seven, although sometimes twelve. Seven could be because it’s the number of sacraments, or it’s the most common number in the bible, or a slightly adjusted reference to Matthew 15:36 (referencing seven loaves and an undisclosed number of fishes); those who prefer twelve always pin it on the number of apostles, which just raises more questions than it answers, for me. (Are the dishes directly associated with any particular apostle?) 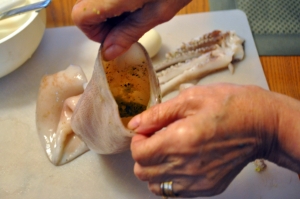 While my mother and grandmother still live by the ocean, and while the state of Virginia has not formally expressed any opinion on beating creatures on the rocks of its tourist-filled beaches, they tend to favor a more modern method of tenderizing the squid: freezing it. The ice crystals do just enough harm to the flesh to keep it tender through a short cooking process. For smaller squid, that will work by itself.

For a longer cooking process, as we see here with this larger specimen, a second tenderizing is required, and for that, you have options. You could conform to the stereotype and attack it with a rolling pin (Japanese chefs use a large burdock root, which evidently has the right amount of give), but a less violent method is to place kosher salt and the calamari in a salad spinner and let centrifugal force slice into the flesh. A quick rinse afterward and you’re ready to move forward. 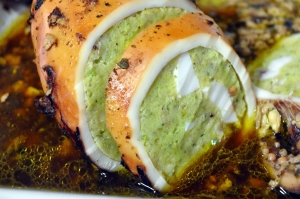 As far as cleaning the calamari, you should ask your fishmonger to do that–not that you can’t do it yourself. But if you can, you don’t need the explanation, and if you can’t, I’m not going to be able to convey the full process effectively in words. The high-level view is that you want to remove the innards, the spine, the beak, and the cellophane-like skin. I’ve done it before but I’d have to be very, very hungry to attempt it again. It was exhausting.

You’re already forgiven if you choose not to make this; I understand that not everyone is eager to dive head-first into sea monsters. I certainly wasn’t. But properly cooked calamari is a triumph, and you should strive for triumph in the kitchen. While we can’t all claim to have grown up on an ocean, for that one moment when the lemon and the salt and the flesh combine in your mouth, we can all experience it.

Seal the tube after filling either with toothpicks or with kitchen twine–you must seal it.

Cook on medium fire in a lightly oiled frying pan. You are aiming for a slow “roast.” Turn it to make it brown evenly. A larger calamari will take 45 minutes to cook. Smaller ones, about 25-30 minutes.