The cheesy cousin to the potato classic. 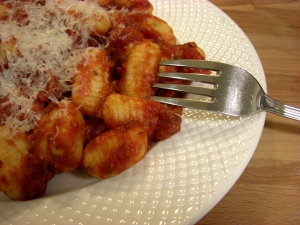 Three weeks ago, we discussed the family controversy over ricotta gnocchi in the post for Yesterdish’s potato gnocchi. (We also discussed the origin and evolution of pasta and dumplings in Italy, so if you didn’t read already, it’s not a bad place to start.)

Dori doesn’t like ricotta gnocchi, but the only reason she has for not liking them is that they’re not potato gnocchi. That’s true, but there are certain advantages to not being potato gnocchi. The ricotta version is higher in protein and has dairy finish that pairs better with acidic sauces like Yesterdish’s tomato sauce.

It’s also somewhat easier to make as a novice. It has to do with the art of using as little flour as possible to preserve the taste of the ricotta or potato.

You can’t follow a recipe with gnocchi. It’s something you have to learn to feel with your hands.

While I’ve made potato gnocchi more times than I could possibly count, the earlier attempts tended to end in one of two equally undesirable ways. One is that I wouldn’t put in enough flour out of fear that I’d drown the flavor, and the result was unshaped lumps of mashed potato that were held together with a prayer, if at all. The other would be my overreaction to those attempts, where I’d add so much flour that the result was a pasta dough into which some potato had been mixed.

Because you can’t predict exactly the water content of either your ricotta or your potatoes, you can’t follow a recipe with gnocchi. It’s something you have to learn to feel with your hands. That said, the moisture variations in potatoes are greater than the moisture variations in commercially-produced, low moisture ricotta. The net result is that, while ricotta and potato gnocchi both require a degree of skill to produce, the ricotta version offers a much wider margin for error.

This is especially true with ricotta because you can drain it, as I did here. It’s not strictly essential if you’re using low moisture ricotta, but it’s still a good idea. Remember, the idea is to use as little flour as possible, and the less water in the ricotta, the less flour you’ll need to balance it. Don’t expect a huge amount of liquid to drain off if you’re using low-moisture ricotta; it’ll be measured in teaspoons, but those teaspoons will still make a big difference in the final product.

(Mashed potatoes won’t do that. If you put mashed potatoes in a paper towel lined strainer, you’ll have a paper sack full of mashed potatoes and that’s about it. While the whey naturally wants to drain off from the solids in ricotta, the starch in potatoes holds the water.) 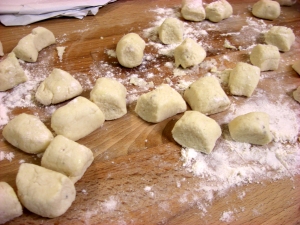 Additionally, until you add the flour, it isn’t possible to over-work the ricotta mixture. While bad things will happen to potatoes if you mix them too much–the starch granules will rupture, releasing trapped water and producing something that resembles a glue soup–ricotta curds are only too happy to be beaten and abused. Once you add the flour, you need to be a little bit more gentle with the ricotta to avoid producing too much gluten, but again, the margin for error is greater than it is in the potato version.

Let’s look at some tips common to both potato and ricotta gnocchi. don’t want to cook them at a boil. Your inclination will be to drop them into water at a rolling boil, I know, but gnocchi are delicate, and all you’ll accomplish is a pot full of pieces of beaten-to-death gnocchi. The water should be at the barest simmer. 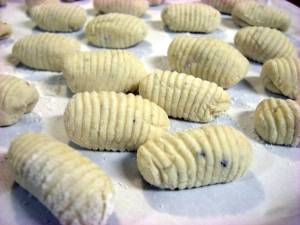 Another common factor is that you don’t time the cooking process–the gnocchi will float when they’re ready. It’s a convenient trick of specific gravity–when the dumplings absorb enough water, their overall density will lower and they’ll start to float. Just scoop them out with a slotted spoon and keep going.

When made properly, gnocchi are somewhat more delicate than a pasta would be; if you find that you have a batch that’s more delicate than you expected, you can skip putting the gnocchi in a saucepan with the sauce and instead layer gnocchi directly from the pot into a casserole with the sauce. This avoids some of the handling that could damage them for presentation, although you probably ought to make them a bit firmer next time. 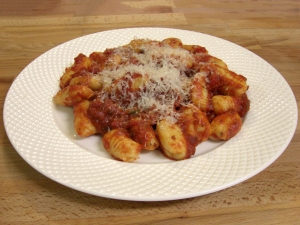 I only used about half of the dough that I made here, and I saved the rest in a plastic bag for later. If you’re in a hurry, you can snip off the end of the bag and squeeze the ricotta mixture directly into simmering water without shaping them. While this isn’t ideal because you’ll lose out on the ridges, it’s a heck of a lot faster, and avoids the issue that can arise with condensation making your ricotta a little bit too wet to handle. (Or add flour, if you’d prefer.)

Finally, while I think ricotta and potato gnocchi are both delicious, I think toasted ricotta gnocchi may have the edge on the similarly-crisped potato counterpart. Instead of adding sauce to your gnocchi, transfer them to a storage container with a drizzle of olive oil, carefully laying them out so they don’t stick together, as if you were storing tortellini. Chill them overnight. 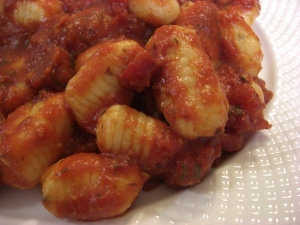 The next day, the cold gnocchi will be heartier to handle; saute them in a nonstick skillet with a little more olive oil and some rosemary and they’ll crisp on the outside while turning warm and creamy on the inside.

It’s a perfect pairing with braised short ribs or oxtails, because you can also chill the ribs or tails overnight to let the fat solidify and remove it from the braising liquid. (Guess what I’m doing with my leftover ricotta gnocchi dough?)

Optional: substitute nutmeg for persillade, or lemon zest, or fried rosemary, or a combination of the above.

[Serves two as a main course, four as a first course.]