When Americans talk about Lobster Cantonese, we’re usually talking about deep fried chunks of shell-on lobster in a cornstarch-based sauce that includes black beans, garlic, and egg. But there’s no such dish in traditional Cantonese cuisine.

It’s actually contrary to the basic Cantonese culinary aesthetic that fresher ingredients deserve lighter spices, which tends to mean that seafood gets the lightest spicing of all. Compare a shrimp chow fun or a steamed sea bass to beef in oyster sauce or braised pork belly with lotus root. Combining fresh lobster with aggressive fermented black beans would be considered odd.

Actually, even the other most frequently seen Cantonese-inspired lobster dish–lobster with ginger and scallions–was originally a preparation for crab. Although China is mad for lobsters now, I haven’t been able to find any evidence that there’s been much fishing of the native South China Sea lobsters, like the deep-sea spiny lobster. Even today, the lobster available in China is generally rock lobster imported from Australia.

Sigh. You’re not paying attention to me anymore, are you? You’re thinking about the B-52s. Fine, get it out of your system:

Now, where we were? Right, the origins of Lobster Cantonese. The earliest mention I’ve been able to find is from Walter Winchell’s syndicated column–here it is in the February 27, 1942 edition of the Waterloo (Iowa) Daily Courier: 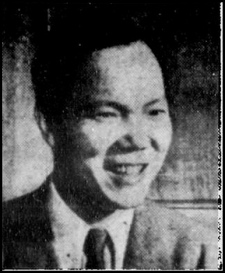 In 1929, Sou Chan came to the United States without a dime in his pocket, the ticket paid for by his uncle. He arrived in Portland, and did odd jobs; he moved to Chicago to work as a dishwasher. In 1935, he came to New York City as a truck driver.

He saved enough money by 1938 to spend $6,300 to buy a building on 52nd street and 7th Avenue. Four years later, and his House of Chan was already known coast to coast.

Chan was a character. He refused to sell his building to build a skyscraper; ultimately, a building was built around it, and he sold the “air rights” above his building for about $45,000 a year, earning the family millions over his lifetime. He died in 1978, of cancer. The restaurant closed and the family sold the building in 1981; horror of horrors, the location is now part of a chain of bars.

But yes, House of Chan was early to the Lobster Cantonese party, and kept it going strong. Here’s a version listed on a menu of theirs from 1962, and a matchbook.

And actually, while we’re reading, let’s also peek at another dish on the menu:

So why Cantonese? Chan was from Guizhou, after all. But black beans are particularly associated with Cantonese cooking.