Using cooking sherry, which we didn’t talk about yet. (We talked about sherry in general in the recipe for raspberry trifle from this box.) 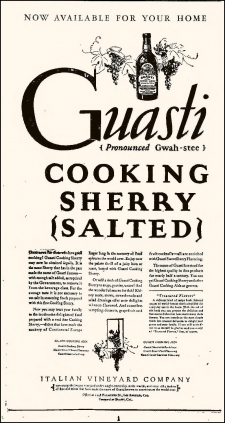 The recipe specifies no salt because modern cooking sherry is already salted. If you’re inclined to provide your own sherry, absolutely do add salt to taste when reducing the sauce.

At the same time, modern cooking sherry isn’t “bad” wine, the way its 19th centuries predecessors were. It’s just wine intended to be used in small amounts with food. Some compounds in food are alcohol-soluble, and you could use a dash of cooking sherry to bring them out.

But using a whole bottle, as this recipe specifies? A typical bottle these days is 16 ounces, or 32 tablespoons. Using a USDA daily guideline of 2,300 milligrams maximum per day, that bottle has the daily sodium intake for 2.8-ish adults; divided among a family of four, that’s 1,600 milligrams per person. Which is a lot–about twice the sodium of a serving of condensed chicken noodle soup.

(Buy about what the size family would require–1 to 2 pounds.)

Cube into small pieces. Take off all fat.

Get bottle cooking sherry; use all of a big bottle. Soak cubed sirloin in sherry all night (place in refrigerator). Take beef out of sherry, drain, saute in small amount of Crisco. Then add leftover sherry and cook until tender. Make toast and slice in 4 pieces, triangular shape.

Do not salt meat.

It is okay to add pepper.

Mushrooms in fluid may be added.