A Greek treat for the upcoming Olympics, but not from them. 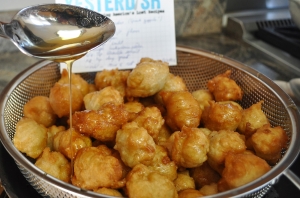 Many cultures have some version of fried doughnut-like preparation–the Italians have zeppole, the French have beignets, the Israelis have sufganiyah, and the Greeks and Turks share loukoumades.

Yeast-raised, honey-drizzled, and sometimes sugar-dusted, these delightful bites can claim another heritage: internet legend. Because online, loukoumades are repeatedly held up as having been served to the victors of the first recorded Olympics.

I don’t know why this is important to people. Heck, I don’t understand why we think the Olympics are important, for that matter. But since we’re having another round of Olympics kicking off this Friday, I’ll indulge the weird obsession of the internet long enough to point out why these delicious bites of heaven have nothing whatsoever to do with the overgrown McDonalds playground that is the Olympics.

Loukoumades need no Olympic excuse to appear at your next party.

The Internet is absolutely clogged with statements along these lines:

Oldest recorded dessert? So you think the Egyptian hieroglyphics of people eating honey and figs is the oldest recorded appetizer in the world? 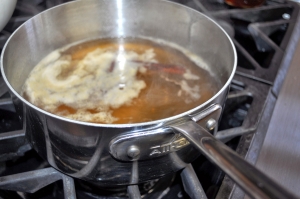 It’s a cute story, but I can’t find any reference to anything resembling “honey tokens” in any of the poems or fragments of Callimachus’ writing that survives. There’s a reference to virgin priestesses burning honey-cakes as offerings, but that’s about it.

All I’ve seen that mentions the games that would become the Olympics are in Aetia, a group of poems about being carried to Helicon and having the gods tell legends. So if this reference is from there, well, it’s next to a story of Pegasus creating a river with its hoof.

If anyone knows what fragment this reference is supposed to come from, please let me know. But from a historical perspective, it wouldn’t mean much if such a reference even existed. Callimachus wouldn’t have known anything about the first Olympics.

The date of the first recorded Olympics was 776 B.C.; Callimachus was writing in the third century, B.C. (that is, sometime between 300 and 200 B.C.). That’s a pretty significant chunk of time. Relying on Callimachus to report what happened at the first Olympics is like checking TMZ to see what Pocahontas had for breakfast on her wedding day, April 5, 1614. 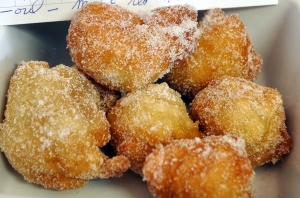 So what actually happened at that first Olympics? In 776 B.C., the only event was a roughly 210-yard footrace called a stadion, a name that was shared with the structure that held it. Twenty naked men would run the dirt track together for the privilege of winning (at the time) an olive branch. (Don’t get too excited, ladies–women weren’t allowed to watch.)

It’s hard to imagine a nude Olympics anymore because I can’t imagine anything that could make the Olympics even less watchable. Seriously, why do grown people pay any attention to this? And how are these people heroes? You know, these are people who have been repeatedly told to hurl themselves down the side of a mountain for a living. Think about the kind of person who would be given that advice over and over–and then take it.

To the extent there’s an actual culinary connection, the recorded winner in 776 B.C. was Koroibos of Elis, a cook and baker. Which makes the supposed history of loukoumades even more laughable. “Oh, that’s for coming out and racing naked against a pack of naked guys. Your gifts are a stick and some food you could’ve stayed home and made with your clothes on. Have a nice trip back to Elis.” 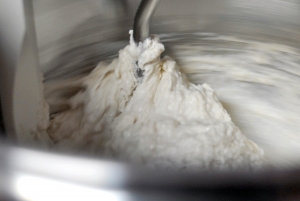 All of that said, while the evidence isn’t there to support the presence of loukoumades in early Olympiads, there’s nothing that makes it categorically impossible, either. Most of the basic constituent elements of loukoumades were available in 776 B.C. The Greeks had wheat bread (although barley was more common), honey, and olive oil, and had visited Egypt, where frying took place and cinnamon was available.

They didn’t immediately appear on domestic menus, however. One early reference is to their Turkish form, lokma, in a piece reviewing the Turkish diet from the October 12, 1928 edition of The Hutchinson (Kansas) News:

Weird, maybe, but less weird than a poet supposedly writing about naked men eating doughnuts 400 years before he was born, and using that to justify making them.

Loukoumades need no Olympic excuse to appear at your next party. The vanilla harmonizes the sweetness of the honey with the slight residual sourness of the yeast. The texture is even more complex, the crisp exterior given just the right amount of yield from the syrup.

In a medium pot–over medium heat–boil and cook for 45 minutes:

After boil add 1 oz. honey (to be added at the very end).