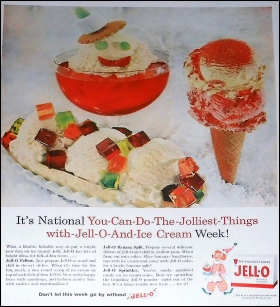 From around 1900 until about 1940, Jell-o’s various brand owners marketed Jell-o Ice Cream Powder. (We saw an ad for it in the post for plain ice cream from the Lutz, Florida box.) General Foods also test-marketed “Jell-o Freezing Mix” in the Northeast in the 1930s. The difference was that the mix was a powder that could be used to flavor the milk in the ice cream while the freezing mix was a flavored syrup, sometimes with nuts or pieces of fruit, that didn’t have to be dissolved in anything and contained all the required sugar.

While both were discontinued in the early days of World War II, that wasn’t the end for the interaction of ice cream and the Jell-o brand. Although Jell-o marketed ice-cream-and-gelatin desserts in the 1940s, they didn’t really catch on until the late 1950s and early 1960s.

For example, here’s Johnny Carson in 1957 from the set of Do You Trust Your Wife, demonstrating how to make an ice cream pie:

But “fingertip Jell-o” didn’t come along until around the 1970s, although the early versions were marketed by Knox under the name Knox Blox. These were firmer than what the 1980s and ’90s kids know as “Jell-o jigglers,” but some recipes, like this one, used both to achieve a gelatin firm enough to handle, but soft enough to avoid the kind of bounciness that Knox Blox sometimes had.

A basic version appeared in the August 17, 1978 edition of the Orrville (Ohio) Courier Crescent:

(Y'know what they call Jell-o in Mrs. Ayers' kitchen? Click to expand the picture from the article.) 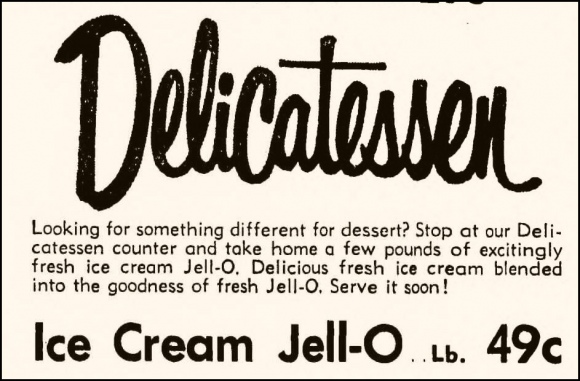 Soften unflavored gelatin in 1/4 c. water and set aside.