A Japanese ingredient we probably don’t realize we recognize.

This is one of those times where the explanations given for the origin of a food drift from merely fanciful basically inventing legends about legends, but let’s start with the basics.

Kamaboko is a variety of seasoned surimi. Surimi is category of products made from ground fish paste, usually mixed with some combination of seasonings and starch or other thickeners. We’re most familiar with it in the form of fake crab sticks; Kamaboko is a specific formulation of surimi that includes salt, sugar, and usually MSG, which is then either steamed on a board or grilled on a stick.

Some sources describe Kamaboko as being pickled surimi or cured surimi, but I think that stretches the concept of either process too far. By that standard, anything you grind with enough salt or sugar is cured. If this is cured, then a Three Musketeers candy bar is cured.

Anyway, a number of places online repeat the following supposed origin for Kamaboko: In the ancient Japanese book the Nihon Shoki, the Empress Shinko is described as grinding fish with rice and grilling it on a spear, making the earliest form of kamaboko. 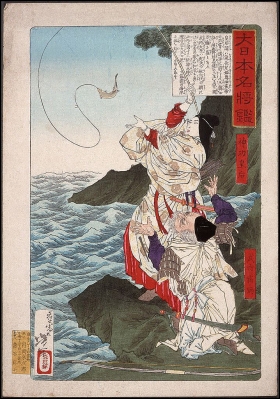 Cute, but there’s no such legend. Actually, unless you account for some broad transliteration ideas, there’s no such Empress. But one source described this as happening during a break in the fighting with three kingdoms in the Korean Peninsula, suggesting that this is supposedly a reference to Empress typically transliterated as Empress Jingu or Jin-go.

Those links will take you to the legend in each respective book, but here’s a plain-language summary of the context (in my own words, so please don’t skip the poetry of the original):

Jingu was married to Emperor Chuai. The Gods spoke to Jingu and told her that Chuai must attack the Silla Kingdom, a country they could not see from the mountain; Chuai wanted to attack the Kumaso tribe. Chuai asked, “Why should we set out to attack a kingdom we can’t see, when there’s riches we can see right here?”

“Because the Gods will kill you,” Jingu said. Chuai would not listen, and the Gods did kill him. Jingu, as Empress, conquered the Kumaso, and then turned her attention to the Silla. (After all, the Gods did not say that the Kumaso could not be conquered; they only said Chuai was not to do it before Silla.) 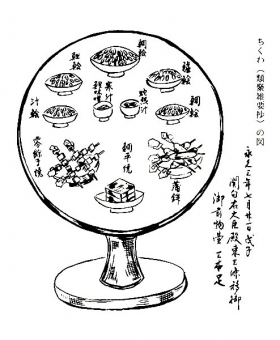 After that, the Empress ate by a river where she noticed fish. Using threads from her garment and a bent piece of metal (possibly a needle) as a hook, she said, “If I am to seek the Jewel kingdom, let this fish take my hook.” She baited the fish with grains of rice from her lunch, and the fish took the bait. Even today, the legend says, a woman who fishes with a bent needle in the river catches a trout right away, but men never do.

Two things are notable for kamaboko’s role in this process. One, the legend never says what she did with the fish. And two, the legend makes clear she already had food when she went fishing.

A more likely first reference is from a book on imperial etiquette from the Heian period (794-1185), which seems to include grilled Kamaboko in the instructions and diagrams. By the Edo period (1603-1868), commoners enjoyed it.

Scrape off meat from fish with spoon, pound well in bowl (or suribachi). Slowly combine 1/2 of water and salt into fish meat. Pound well.

Pound again. Beat in egg white, mound on boards and steam until done or mix with gobo slivered and/or carrots and drop by spoonful into hot oil.

gobo
Burdock root. Raw, it's crisp, sweet, and pungent, but it's often soaked before cooking to reduce its intensity.
Ajinomoto
A Japanese food and chemical corporation; when listed in a recipe, typically refers to their flagship product, MSG.