Or flounder. Or halibut. Or even sole, hypothetically. It’s complicated.

The common sole, or solea vulgaris, is a fantastic choice whenever you can find it. It’s generally known as Dover sole, named after the English port where boats would arrive with the catch from the Atlantic, and its firm flesh is known for its buttery-sweet flavor that’s usually served as simply as possible.

And it’s entirely possible that you’ve never had it in the U.S. Getting actual Dover sole in the U.S. is not a simple proposition–it has to be shipped from England or Norway and the price reflects the added cost of the voyage. When you see it on a restaurant menu, they’re usually serving you flounder or halibut.

This isn’t a new problem. I’ll let our friend Fannie Merritt Farmer explain, in the words she used in The Boston Cooking-School Cook Book in 1896:

What all these fish have in common is that they’re flatfish–the adults have both eyes on one side of the head. This allows them to live along the bottom of oceans (or in the case of some varieties of flounder, estuaries) and keep an eye out for prey. Unfortunately, what these fish don’t have in common is flavor or texture.

Halibut is dense and flaky, but is very mild and doesn’t have the richness of Dover sole. Flounder falls on the other side of sole: it’s a bit smaller, but has a more assertive taste. And then there’s pacific Dover sole. 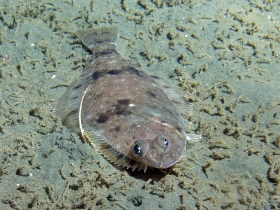 Sigh. Yes, pacific Dover sole. Which is a flounder and not a sole, and is fished off the Pacific coast, about 5,500 miles away from Dover. It’s a perfectly fine fish, as long as you’re not comparing it to Dover sole. Compared to Dover sole, it’s a bit dry and a bit skinny.

This recipe, with its assertive flavors, is probably intended for flounder or halibut. Putting mustard and tarragon on a common sole is a bit like buying $40-a-pint pure vanilla ice cream and covering it in Hershey’s syrup.

While the card says boil, and you certainly could poach sole and finish it with a sauce, only convective cooking methods include distances, so it must have been broil in the original.