A story of a beach, a bivalve, and a brand.

In the late 18th century, the Spanish started to colonize a part of California the native Chumash called pismu after their word for the tar they used to make their canoes watertight. (The Chumash had a cuisine of their own that we should discuss at some point, which included various kinds of clams, abalone, snails, and a laurel sumac flour.)

Among the natural resources the Spanish prized were sea otters, which were hunted almost to extinction in the area. As the otter population reduced, the clam population increased, and while the overall area came to be called San Luis Obispo, the clams washing up on Pismo Beach were so abundant that people could fill buckets.

(San Luis Obispo is literally “Saint Louis, the Bishop,” after a 13th-century Italian prince who was given to the Spanish as a hostage by his father and who ultimately became a Catholic bishop rather than rule over Naples. Which is another story, but I mention it because it feels a bit odd to name a place after someone you took hostage, even if it was five hundred years earlier.)

Ultimately, the large, exceptionally sweet clams came to be called Pismo clams, primarily because they were so abundant on Pismo beach, but also because slightly catchier than the scientific name tivela stultorum. I’m not sure in tivela, but isn’t stultorum conjugated Latin for something that’s stupid? Maybe that’s because Pismo clams hide just six inches under the sand, which isn’t a very clever place to hide from hoards of hungry Americans, who raked them up by the hundreds with clam-forks.

In 1947, California banned commercial catch of the Pismo clam; now, with a fishing license, you’re entitled to only ten per day. Which means most of the clams in Pismo’s restaurants come from Mexico–or, horrors, aren’t Pismo clams at all, but something else. But the area is still famous for its clam chowder, which is probably what this recipe is for.

Probably. Because there’s another possibility.

There was a Pismo brand of minced clams that also produced clam nectar. Clam juice or liquor is the liquid drained from clams; clam nectar, on the other hand, is a version of the juice where the water content has been reduced and the juice concentrated to the consistency of a stock. 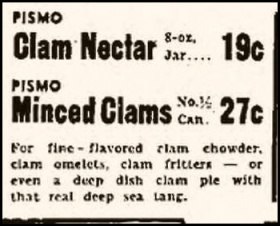 Based on its advertising, Pismo Minced Clams, Inc. was active between the early 1940s and the mid-1970s, although it’s hard to tell if they were producing clams before then. It appears to have been unrelated to the Pismo vegetable canning company from Oceano, California.

Another factor that checks out about this being a recipe from the Pismo Minced Clams corporation is the use of curry powder. The company published recipes, from time to time, and while I haven’t found this specific recipe, consider this recipe from an undated pamphlet put out by the company:

Well, great. But what’s the question mark in this recipe? If this soup was a chowder, it’s probably either cream or half and half. If it was a bisque, it could’ve been crushed tomatoes, stock, or even just water.

Despite the “low-cal” (if I’m reading that correctly) note, I’m still thinking chowder, because because sherried chowder is a classic. And if this is a chowder, then we need to carefully consider the order we want to combine things. Our major concern is avoiding curdling the dairy with the acidity of the sherry and lemon juice; there’s a few ways we can avoid that.

One would be to increase the fat content of the cream by adding melted butter, but let’s just take that off the table–we don’t want to eat butter soup. (I mean, we do, but we’re not going to.) Another is to ensure we don’t boil the mixture of acid and fat once it’s been combined. We could add the sherry while cooking and then add the cream at the last minute, or add the cream while we’re cooking and finish it with the sherry.

I’ll suggest a method that splits the difference: gently heats the clams and cream together (since we don’t want the clams to cook further than they have in the can) and then add the clam and cream mixture to the stock at the last minute.

There is an interesting footnote about Pismo beach and Pismo clams. Remember the otters? While they were an endangered species, there was an official government “policy” of not permitting them to live below a certain point on the California coast because it could endanger commercial fishing interests. Otters were to be “translocated” further up the coast. The program was scrapped in December of last year for reasons explained in a December 18, 2012 SFGate.com story:

Since then, otters have been enjoying the Pismo clams, too, reducing their populations further. Some people complain that the “re-introduction” of otters to Pismo is bad for people. Now, I’m pretty far from an environmentalist, but for the record, I think discontinuing a policy of murdering or kidnapping creatures isn’t exactly “re-introducing” them.

December 14, 2009: Sea Otter Mother with pup sharing Pismo clam dinner a few miles up the coast from Pismo Beach, at Morro Bay. Oh, were these your clams? Look how much she cares. By Mike Baird on Flickr.