And how not to name a cookbook. 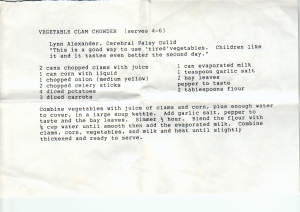 There was another copy of this recipe in the box, with a quote attributed to Lynn Alexander of the Cerebral Palsy Guild: “This is a good way to use ‘tired’ vegetables. Children like it and it tastes even better the second day.”

The Guild was active between 1961 and 1995 and supported United Cerebral Palsy of Sacramento with fundraising and logistics. Among their fundraisers were cookbooks that included recipes from celebrities and non-celebrities alike, including a numbered series named the California Poppycoctions Cookbook.

You do sort of have to wonder if this was the first name that popped into their heads.

Combine vegetables with juice of clams and corn plus water to cover in large soup kettle. Add garlic salt, pepper to taste and the bay leaves. Simmer 1/2 hour.

Blend flour with 1/4 c. water until smooth, then add the evaporated milk. Combine with clams, corn, vegetables and milk and heat until slightly thickened and ready to serve.