Or croquettes, if you prefer.

This recipe was a popular way to economize by using leftovers. Here’s an example from the September 9, 1917 edition of the Boston Globe:

It reminds me of a recipe on my shelf in the “Family fare: food management and recipes” booklet from the U.S. Department of Agriculture, released in 1950 as Home and Garden Bulletin No. 1.

I confess, however, that the 1950s fabulousity is only half the reason I love this booklet. The stamp on the cover reads, “Cecil M. Harden, Member of Congress, 6th District, Indiana.” Harden was a Republican. 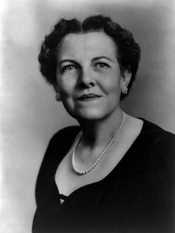 Knowing nothing else, you’re likely to picture someone like Cecil B. DeMille or Cecil Fielder or Cecil Day-Louis (Google it, get some culture). But this isn’t Cecil as in SEE-Sil, it’s Cecil as in Seh-SEAL.

Cecil Murray Harden was the first (and until 2013, the only) female member of congress elected from Indiana. She served five terms, from 1949 to 1959, and was a teacher before running for congress.

The Evening Independent‘s January 28, 1949 edition reported that Harden “does all her own cooking and baking, is proud of her chicken and dumplings and her angel food cake. She is fond of knitting, crocheting, and working on needlepoint.”

Crocheting and cooking? Maybe I should run for congress!

Place on a frying pan in spoonfuls and turn as pancakes.

Mashed potatoes may be used instead of bread crumbs if desired.