Well, I’m not being funny, although the truth is a little more complicated than that. The most likely origin of the name ketchup is a Chinese fish sauce with a name that sounds a bit like kê-chiap in Mandarin. British sailors were likely exposed to it in Singapore, a major trading post for the East India Company, in the early 18th century.

Most Western ketchups in the 1700s were vinegar-based and included some amount of anchovy; the consistency of these sauces would’ve been more along the lines of a Worcestershire. American colonists brought along the concept, and while some early American ketchups used berries, mushrooms, and other additives to change the taste, the basic recipe relied on vinegar and anchovies.

Consider the following example from the 1830’s anonymously-authored The Cook Not Mad:

At some point in the early 19th century, American cooks started making tomato-based ketchups that were thicker and less salty. (But I don’t think 1801 is the correct date; the cookbook most sources cite as the earliest tomato ketchup recipe contains recipes later than its supposed publication date.)

So what does this have to do with Szechuan shrimp? Let’s back up half a century-ish. 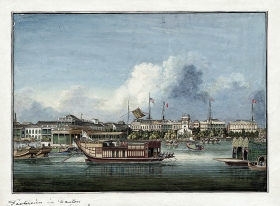 You might remember that many of the objections the Americans had to British rule around 1776-ish took the form of tea-related protest. While the Second Treaty of Paris in 1783 ended formal hostilities between British and American naval forces, most British colonies in the Atlantic were closed to trade with American ships. Nevertheless, the American public wanted tea. Just not British tea.

In 1784, the first American ship reached China; its owners made a substantial profit trading coins and ginseng for tea, then selling the tea when it returned to New York in 1785. This informal, non-governmental trade continued undisturbed until 1844, when it was modified with slightly more formal terms. And it was likely sometime before 1844 when tomato ketchup was carried by Americans back to the Chinese, where coastal Chinese chefs incorporated it into their dishes, as they did every food product that passed through the ports.

The next time you find yourself sitting across from a snob in a Chinese restaurant who wants to argue over the authenticity of ketchup, offer him or her this little reminder, in light of the fact that hamburgers (at least under that name) didn’t really exist until around 1900: the Chinese have been putting ketchup in their shrimp longer than Americans have been putting it on hamburgers.