A curry honoring a Mexican-American maître d’ at a U.K. emigrant’s Kansas City restaurant. (Ordinarily I’d think of something clever to say, but sometimes nothing is more baffling than the truth.) 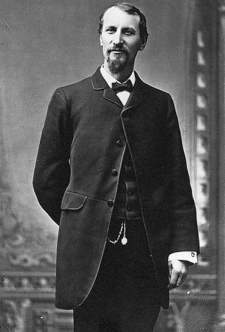 But as usual, let’s start at the beginning, which is the mid-19th century.

When Fred Harvey came to the United States from Liverpool at the age of 17 in 1853, he took a job washing dishes in a New York City cafe. By the Civil War, he co-owned a cafe in St. Louis with a confederate sympathizer–who took the money the two had earned and left.

Harvey got a job with a railroad and had to travel along the rail lines frequently, but found the food to be sub-par. Ultimately, a handshake deal with the superintendent of the Atchison, Topeka and Santa Fe Railroad line in 1876 would lead to a chain of eating establishments at the rail line’s stations–the first chain restaurant in the U.S.–as well as hotels and eventually dining cars.

Harvey Houses were primarily famous for the value of the food they served and for hiring attractive women who would be known as “Harvey Girls.” But this story isn’t really about Fred Harvey (who died in 1901, long before this recipe came into being), so let’s move on.

One of these Harvey House restaurants, named the Westport Room, was located in Kansas City, Missouri’s Union Station. From the July 16, 1936 edition of the Kansas City Star:

The head waiter of the Westport Room, at least from 1940 onward, was Jose Maciel, though he preferred to be called Joe. (His promotion was recent; I say that both because he crossed out the word “assistant” and because a May 1939 article lists an Otto Schneller as the head waiter.)

One thing to know about Harvey Houses is that, despite their specific branding, they actually shared menus–each restaurant would use the same menu for about four days, then all the houses would rotate menus at once, so that a traveler along the line would have different food at each stop and not get bored. The Harvey Girls all wore the same uniforms, so you had a similar experience from place to place.

But Joe Maciel was still something special, and became something of a legend. He even went off-menu, creating a sundae with strawberries macerated in rum, then cooked in honey and orange zest. He became enough of a legend that at some point, Westport Room’s Chef Joseph Amherd created this chicken dish in his honor.

From what I can tell, Maciel stayed at the Westport Room until it closed in 1968. Some sources date Chicken Maciel to the 1940s, but I can’t find any evidence that it existed before the 1950s (which doesn’t mean it didn’t, it just means I haven’t figured it out yet).

Yesterdish note: The cream sauce is just bechamel, and at least one comment online from someone who ate the original suggests the sherry called for is cream sherry, which makes a lot of sense.