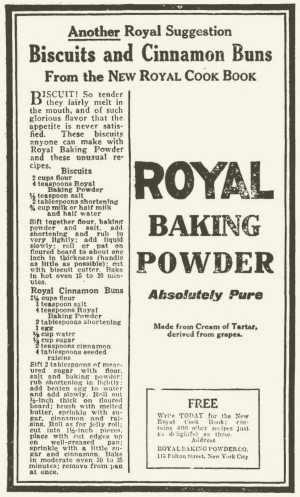 In 1866, grocers and druggists Cornelius and Joseph Hoagland were having trouble selling their store-made baking powder. Which shouldn’t be a shock, because baking powders at the time consisted exclusively of mixtures of baking soda and cream of tartar (with a little cornstarch to soak up any moisture), meaning they were pretty much interchangeable. Joseph, ultimately, took credit for the idea to name the product Royal Baking Powder in 1873 and to spend, ultimately, half a million dollars a year on advertising with the help of outside investors.

It worked, for what it’s worth. Although it also created a challenge, shortly thereafter.

As we’ve discussed in the past, cream of tartar is tartaric acid, which at the time had to be scraped from the sediment in wine barrels. In order to secure their supply, the Royal Baking Powder company entered into exclusive contracts with some European suppliers.

But a few years into production, people discovered that hydrated potassium aluminium sulfate, or alum, produced an even stronger reaction, and worse still, alum is naturally occurring in the environment, so while it has to be extracted, you can extract it domestically (this was a little before California had a meaningful wine industry). Royal was sort of stuck with cream of tartar.

So what else could they do? They bragged about how the product had no alum.

The advertisement above refers to the New Royal Cook Book. As you might imagine, I tend to collect the occasional odd old recipe book, and I have a copy of the 1922 edition. The version of the recipe in it is doubled in size and slightly different in name and instructions:

Which really just leaves the question: why Philadelphia? 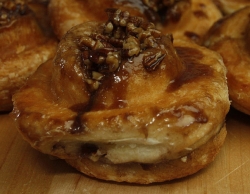 Well, while the British had a cinnamon roll that was cinnamon and butter rolled up, the Germans had a roll called schnecken, which was also a cinnamon-spiced sweet dough, but often included raisins, nuts, and honey.

As German Jewish immigrants came to the U.S., they settled in places like Philadelphia’s Germantown. So by the early 20th century, cinnamon buns with raisins or nuts tended to be called Philadelphia Cinnamon Buns.

2 Tbsp. from measured sugar and sift with flour, salt and baking powder. Rub in shortening. Add beaten eggs to water. Roll out 1/3 inch on board. Brush with melted butter and sprinkle with sugar, cinnamon, and raisins.

Roll as for jelly roll. Cut into 1-1/2 inch pieces. Place with cut edge up in greased pan. Sprinkle with sugar and cinnamon.