Talk about an arcane recipe. Yikes.

Let’s start with the simple part, I guess. Most of the recipe comes from a 1964 edition of Better Homes and Gardens, at least according to the April 7, 1965 edition of the Lethbridge (Alberta) Herald:

So that’s the core of the recipe. So what’s Funyu? Because I’d never heard of such a thing. It couldn’t be a type of evaporated milk, because it was something that had to come in cakes and it was used in the marinade rather than to coat the chicken. I looked, searches for Funyu came up empty in archives and produces all kinds of random things in search engines.

A glance at the Yesterdish map reminded me that I had at least one more piece of information to use in the search: I was looking for what Funyu meant to someone in Martinez, California.

Martinez is about 40 miles East of San Francisco, where, so the story goes, Chinese immigrant Sing Hau Lee started a company he called Quong Hop & Company in 1906. (I say “so the story goes” because I haven’t been able to find any contemporaneous documentation, but at the same time, that’s not entirely unusual for Chinese immigrants from the early 1900s. It wasn’t until the late 1920s that Chinese-American businesses were even included in most city directories. So this might be entirely true, I just can’t prove it.)

Quong Hop (again supposedly, because I don’t have the language skills) means “Great Unity,” and the shop produced fresh tofu in the basement and sold it at a storefront on ground level. This continued until World War II, which presented a problem: we didn’t produce many soybeans internally. Most of our soybeans were imported from China, and that supply was disrupted by the war in the Pacific and then the second half of the Chinese Civil War.

To avoid spoilage and diversify the sources from which they could obtain supplies, Quong Hop switched from making fresh tofu to only making fermented tofu.

Fermented tofu is more or less exactly what it sounds like. Cubes of tofu are air-dried until they ferment from bacteria. The cubes are then soaked in a flavored brine typically made from salt, vinegar, and seasonings like rice wine. It’s a bit like pickle brine–every pickle is a little bit different, and yet, you know what a pickle tastes like.

So Quong Hop started to manufacture this product, and until the 1970s, it’s the only thing they manufactured; in the postwar 1950s and 1960s, the general American public had newfound wealth and consumption of traditional meat went up. By the 1970s, the focus on health food and renewed interest in vegetarian cooking inspired Quong Hop to return to selling fresh tofu alongside fermented, and to target consumers beyond their traditional Chinese and Japanese consumer base. But we’re getting ahead of ourselves. 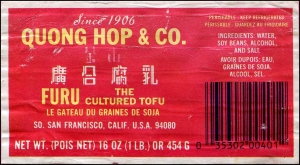 With any product, you have to decide what you want to call it, and in Mandarin Chinese, fermented tofu is usually called fu ru. However, most of the Chinese immigrants who came to California in the 19th century came from Guangdong, and in Cantonese, the name of fermented tofu transliterates to something more like Fu Yue. Furthermore, Taishan is a city in Guangdong province, and in the Taishanese dialect, the word apparently transliterates to something like Fungui.

This might explain why CSU Pomona Science Reference and Instruction Librarian James S. Koga, a native of the area, recalls pronouncing the name on the label as funyu, rather than what was written on it, furu.

Quong Hop stopped producing furu sometime in the late 90s, citing high costs of continuing with a product that served an increasingly niche audience, though imported brands are available. In the last few years, it appears as if Quong Hop has suspended operations indefinitely after the FDA found some violations at its plant.

Don’t let that put you off the recipe. Fermented tofu is salty, with an almost blue cheese-like finish, and would add a rich undertone to a baked sesame chicken. Like, say, this one.

Arrange chicken [pieces in] pan with skin side up. [Bake uncovered] in a moderate oven (350) for 1 hour or until done.