A (literal) twist on pizza makes it more portable. 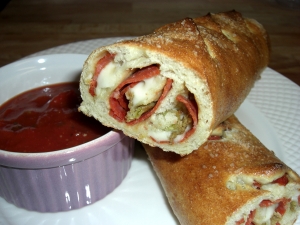 Like many dishes, the exact origin of pepperoni bread is hard to pin down, and it depends on what you consider pepperoni bread. Obviously, the calzone is a cousin, but that’s of Italian extraction, and pepperoni bread appears to be a primarily American phenomenon.


Some of the pepperoni’s fat seeped into the bread, giving the loaf a richness only enhanced by the mozzarella, which would reward any attempts to bite into a piece with an inevitable string of melted cheese.

The pepperoni roll, a shorter, fatter, softer iteration, originated with a West Virginia bakery in 1927, where it was a portable lunch to feed coal miners. A few decades later, the stromboli, a rolled and baked sandwich made from bread or pizza dough that can include a variety of pizza toppings, made its 1950 debut in a Philadelphia suburb as an homage to the 1950 Ingrid Bergman picture of the same name. 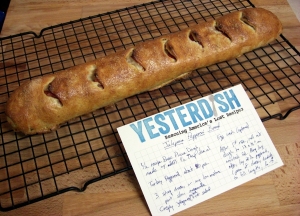 What I can say with certainty is that, by the time I grew up in Cleveland in the 1980s, pepperoni bread was well known to the Italian-American community there, and nobody ever discussed the origin. I don’t know that I have a specific memory of where I bought it, like the subs at Alecsi’s or the bread at Gallucci’s; but that’s the thing–I wouldn’t remember it, because it was so familiar.

And what was it that was so familiar? It wasn’t quite soft, like a pepperoni roll, but it wasn’t quite hard, like a stromboli can be, either; it was a bit closer to the consistency of French bread, with a balance of chewiness and crunchiness. Some of the pepperoni’s fat seeped into the bread, giving the loaf a richness only enhanced by the mozzarella, which would reward any attempts to bite into a piece with an inevitable string of melted cheese. 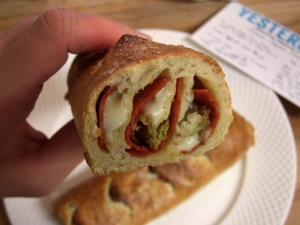 That is pepperoni bread, and that is what this recipe is intended to make. It starts with our pizza dough recipe, except a tablespoon of olive oil is added to the ingredients at the beginning to make the dough a bit more supple. I added crispy fried jalapenos–the kind that come in a bag for putting in salads–to add some spice and cut through the richness. (While you could, in theory, add fresh or pickled jalapenos, the added moisture will reduce the life of the bread even further, so you’d have to eat it just when it was made.)

The story of this recipe is essentially told by the step-by-step pictures below. A few tips: I sprinkled kosher salt on top of the egg wash, but you could use parmesan if you wanted. It’s fine to leave this out for a few hours, but refrigerate it after that point and reheat it in the oven (or eat it cold, if you like). When you take it out of the oven, let it rest on a wire rack for a good two minutes, so that the cheese isn’t so hot that it leaks out.

If you’re a fan of pepperoni bread, I hope this brings you the kind of joy it brings me. And if you aren’t, well, you’re welcome in advance. A single piece makes a great side with spaghetti; two pieces are a satisfying midnight snack; half a loaf with marinara is a hearty lunch; and a whole loaf on the sideboard is an appetizer everybody will be asking about.

After first rise, roll out dough to 12 x 18″ on non-stick foil. Along long edge, lay out 1/2 pepperoni; 1 piece of cheese, divided to fill the length; and about 2 Tbsp. jalapenos. Roll tight just to cover this amount.

Lay out 10 pieces of pepperoni and another divided piece of cheese; add about 1 Tbsp. jalapenos. Roll.

Repeat prior row and and roll into a loaf. Let rise 30 minutes. Egg wash, if desired.