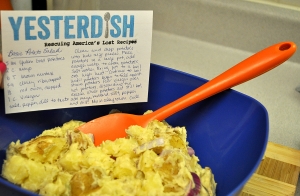 This week I made a basic potato salad. It’s nothing fancy, no exotic spices or ingredients, just the classic, old-fashioned, bring-it-to-a-BBQ kind of potato salad.

I decided to make potato salad because it’s a dish I see go wrong all the time–even at restaurants. The potatoes are undercooked and it tastes flat, like you’re just eating mayo with a spoon. No bueno. No bueno at all.

Some people are into hard boiled eggs. I add fresh peas when they’re in season. Really, the sky is the limit here people. OMG I JUST REALIZED I COULD PROBABLY ADD CORN.

Adam always says that technique is the key to most great recipes, and this is yet another example of that. The there are two important techniques involved in making potato salad: how the potatoes are cooked and when the potatoes are seasoned. The good news is that both are really easy. 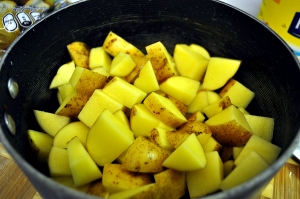 Before we get to cooking the potatoes, a quick note about the potatoes themselves. Most recipes use russet potatoes, and I mean, that’s fine or whatever, but you have to peel them. Lazy Dori hates peeling potatoes (but loves talking about herself in the third person) so she uses Yukon Gold. The skin on Yukon Gold is so much thinner that all they need is a good scrub. As an added benefit, Yukon Gold potatoes also taste better and have a better texture than russet potatoes. So yeah, Yukon Gold.

Most recipes will tell you to chop the potatoes into equal size pieces so they will cook evenly. For this recipe, just generally keep in mind that the potatoes should fit into your mouth. We’re going to cook the potatoes longer than most recipes tell you and embrace the fact that some of the smaller pieces of potato will fall apart completely and blend into the dressing.

Ok, ready for our first technique? Put the chopped potatoes in a pot and fill it with enough water to cover the potatoes. It’s fine to crowd the potatoes in the pot, they’ll all get along just fine. Set the pot, full of potatoes and cold water, on the stove. Add a good amount of salt. Notice that I didn’t have you boil the water first? 1) That takes so much time and I’m lazy 2) the potatoes will cook better if you start them in cold water.

Boil the potatoes on high heat for a long frickin’ time. How long? I can’t give you the exact time because your stove, the pot, and the potatoes all vary. I can give you a test to know when they are done: using a sharp knife, try to stab a larger chunk of potato to lift it from the pot. If the potato falls back into the pot or comes apart with you poke it, the potatoes are done. When in doubt, cook them longer!

Once the potatoes have satisfied the knife test, drain them using a colander.

This brings us to technique number two: seasoning the potatoes while they’re hot. At this point in our potato salad journey, your potatoes are relaxing in a colander, steaming away. Right after you drain them, while they are still piping hot, pour the vinegar over them. Let the excess just spill down the drain. Then, dump the potatoes into a bowl, add mayo, mustard, dill, salt, and pepper. Stir until it looks like potato salad with a little extra mayo (because we’re going to add more stuff to the mix). 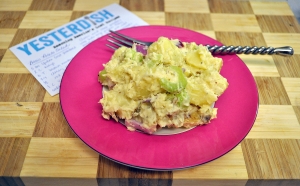 Some of you may be thinking something like, “But Dori, won’t the heat from the potatoes cook they mayo?” No, it won’t. Or maybe it does. I’m not entirely sure. [It depends, but the short answer is no, if it’s commercial mayonnaise. You can broil commercial mayonnaise and nothing interesting will happen. With homemade mayonnaise it shouldn’t happen, but I can envision a universe where the potatoes are so hot the yolks scramble; I just don’t think vinegar-rinsed potatoes achieve that temperature. — Adam] I am sure that it makes everything way more delicious, so just do it and stop asking so many questions.

Now you can let the mixture cool a little while you chop whatever else you’re going to add to it. When i’m making it for a crowd, I usually just add celery and red onion. Some people are into hard boiled eggs. I add fresh peas when they’re in season. Really, the sky is the limit here people. OMG I JUST REALIZED I COULD PROBABLY ADD CORN.

Stir in your whatever you’ve decided to stir in (it’s really ok if the potatoes are still warm), taste, add salt/pepper/dill if needed and stick you’re potato salad in the fridge to chill, if you can stop tasting it.

(Special thanks to my amazing mother for teaching me to make potato salad, and the wonderful Claire Ricaurte, who gave me the adorbs pink colander in an Easter basket a few years ago.)

Bring pot to a boil over high heat. Continue to boil until potatoes begin to fall apart. Strain potatoes.