When pork enthusiasts say they eat “everything but the oink,” they mean it.

My earliest experiences with pork rinds weren’t of the home-crafted variety; I grew up in Northeast Ohio, where they raised dairy cows, but there weren’t too many pig farms. I’d enjoy a bag from a vending machine from time to time, but vending machine pork rinds can be like pizza chain pizza: pretty good, but still pretty bad.

Now that my parents live in Virginia near the North Carolina border, finding the real thing isn’t hard, and it’s a very different experience. The balance of fat and protein in the skin results in a treat that is both rich and crisp after frying, conveying every flavor added to it, salt or spice, with double the impact of any other method.

It’s so delicious that it’s hard to imagine that, at most hog slaughters, it was just a by-product of a by-product, made for the workers to eat while they divvied up the more valuable pieces of pig for market.

But that’s how it started with us, too: we bought a couple pork shoulders for sausage that had the rind attached. And my mother, who grew up living a bit closer to the animals she’d end up eating than most of us in this generation, knew how to turn this by-product into a snack.

The properly prepared pork rind should remind you more of a thick slab of crisp bacon than a potato chip. 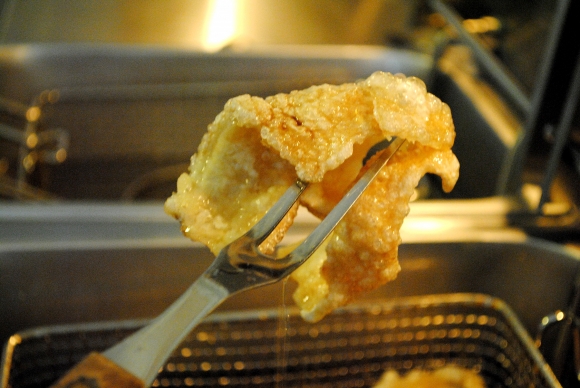 To understand why we (that is, Americans) ended up with pork rinds, it helps to know a bit about the traditional Western method of butchering a hog. I won’t go into too much detail here — I’ve been told people don’t want graphic pig slaughter information with their food pictures. But do understand that this process changed very little between the earliest pig farms in the New World in the early 16th century and the mid-19th century.

In order to use every part of the pig, those parts had to be separated so they could be sent off to their distinct uses. The most obvious of these products is the the meat itself. Gelatin, obtained from boiling bones, would be used to clarify wines. (While skin is also used today, it was somewhat less common to end up in the gelatin pot because it was going to end up in another pot, for reasons we’ll talk about soon.)

Intestines could turn up as chitterlings or sausage skins; pig bladders could be used to store oil paints or make musical instruments (the “bladder-ball” for games like rugby was basically out of use by the time we started slaughtering pigs stateside); and even the hair could be collected and used for paintbrushes. But next to the meat itself, the most important product was probably the pig’s rendered fat, known as lard.

We’ve talked a bit about lard in the past:

Obtaining lard required taking the fatty pieces of the pork — like the skin — and, in the earlier centuries, “dry rendering” them, which meant putting them in a pot and heating it until the fat melted and the fried skin (the cracklings) could be skimmed off. The cracklings had to be skimmed because if they stuck to the pot or burned, they’d ruin the flavor of the lard.

The rinds that came out were very, very crunchy (like, tooth-endangering) and somewhat resembled the chicharrones you might get at a Latin grocer. The ones that were too hard to eat would be ground and used in other recipes, like gravies or baked goods.

As time went on, the process turned to “wet rendering,” or boiling the skins. This extracted more fat from the skin and also resulted in less browning of the lard; those who wanted to enjoy pork rinds then had to dry the resulting soggy skin completely so it could be fried. By the 20th century, steam rendering was available, which resulted in maximum yield of pure, silky-white lard, and fortunately, somewhat easier to dry rinds for frying. 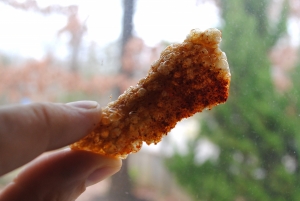 In making our pork rinds, we went with the “wet rendering” process, boiling the rinds before passing them through a dehydrator, though you could dry them in the oven (or, presumably, in front of the fire, as they did traditionally). The lower the fat content of the rind before frying, the higher it puffs when it’s cooked, and the lighter the crunch.

That said, resist the urge to boil them to death. As any rind aficionado will tell you, the toothsomeness of the rind is crucial. It shouldn’t powder in your mouth at the first bite, the way so many vending machine rinds will. The properly prepared pork rind should remind you more of a thick slab of crisp bacon than a potato chip.

Despite their incredible deliciousness, pork rinds were not always welcome as foodstuff beyond the warmth of the slaughter fire. Cracklings that weren’t eaten around the fire were sold by the barrel to use in animal feed — though, mind you, the “cracklings” in this context were not necessarily skin, but anything that was in the rendering pot during the production of lard. Cracklings that made it into the hands of a housewife were far more likely to end up mixed with lye to make a batch of soft homemade soap, and there wasn’t a lot of enthusiasm for rinds at the table.

Consider this early mention from the November 25, 1847 edition of the Boston Post, in an “odds-and-ends” type of column:

Maybe it’s a sign of how far we’ve come, but a bread pudding topped with fried pork skin and Parmesan rinds sounds like a pretty awesome dessert to me. Anybody want to come over for porky parmesan pudding? I’m thinking spiced pears and a red wine reduction sauce over the whole affair.

Or consider the following bit of gossip from the March 24, 1883 edition of The Bath (Maine) Independent:

Why would the other church members eat lozenges, you wonder? Well, it’s probably that the Brunswick girl in question was part of a Christian denomination that observes both the Eucharist (also known as the Holy Communion) and the Eucharistic fast, the latter of which requires abstaining from food or drink for an hour before receiving communion. There are commonly two exceptions: water, and medicine. Lozenges being at least nominally medicinal, it wouldn’t be scandalous to see someone consuming them, even though candy made of substantially the same ingredients would be forbidden.

Perhaps she was having medicinal pork rinds, though? Certainly, the ones we made — sprinkled liberally with spicy berbere, which we discussed in the post for Yesterdish’s Ga’at — would decongest you pretty quickly. But could the rind itself be healthy?

A Nutritional and Economic Value 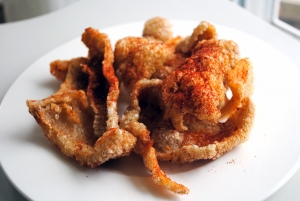 Pork rinds are both high in protein and “not a good source” of protein. But you can turn that around with a little creative crunching.

Pork skin, like most animal skin, is made of the protein collagen, which is entirely lacking in the essential amino acid Tryptophan. So while eating a bag of pork rinds will make you feel full, you won’t be able to synthesize the proteins your body needs from pork rinds alone.

But fortunately enough, Tryptophan is abundant in other places, like pumpkin seeds, oats, cheese, and even dark chocolate. (While Tryptophan is present in all chocolate, it’s probably not in significant enough amounts in your average Hershey bar.) A carefully-chosen granola bar or a string cheese pocketed before the trip to the library could round out the proteins in your pork rinds. If your vending machine offers you each at 75 cents, you could be looking at ten grams of protein for a buck fifty — not too shabby.

So if you get any funny looks buying both pork rinds and a granola bar, well, drop some science on your judgmental audience.

When Lard Vanished From Kitchens

Until World War II, lard was the most common cooking fat. One thing that contributed to the switch to vegetable products was aggressive marketing by for Crisco by Proctor and Gamble, which we looked at in the posts for Ruth’s Pie Crust for One from Sun City, Arizona and A Man’s Favorite cake from River Forest, Illinois; we also talked about the history of Proctor and Gamble and Crisco’s origin as a tallow substitute for soap and candles in the recipe for Toasted Spice Cake from Joplin, Missouri.

But another major contributing factor was that lard was needed for the war effort during World War II. Lard itself was used as a machine lubricant, and glycerin, derived from lard, could be combined with nitric acid to make nitroglycerin, a component in smokeless gunpowder, and therefore, in bullets. And since you can’t win a war without bullets or the ability to see what you’re shooting, the U.S. Government prized animal fat enough to encourage housewives to turn in their used drippings.

Here’s an educational video from Walt Disney to tell you all about the program — though it never enjoyed universal acceptance, because with rationing, reusing fats was as common as turning them in:

I like to picture Rosie the Riveter eating a big handful of pork rinds, just because she loves America. I mean, that’s why I do it. That and the deliciousness.

Still, a sign of how uncommon pork rind consumption was at the time is that they were released from price controls with a bunch of other goods considered unimportant to the cost of living. (Long story short on price controls: during World War I, inflation made the cost of living skyrocket, so during World War II, the government combated that by rationing some goods and controlling the prices of others.) Here’s the news, from the May 15, 1946 edition of the New York Middletown Times Herald:

So in 1946, the government’s official position was that pork rinds were as important to the American kitchen as powdered bananas, salted shark flesh, and canned rabbit. (This would also make for the most awful basket ever on Chopped.)

Advertisements for pork rinds started to show up around 1950 and proliferated into the 1960s. The 1960s is also when you started to see the word “cracklings” used at times to refer to the crunchy consumer-friendly end product, instead of “fried pork skins” or “pork rinds.” Here’s an ad for Morton Foods from the December 5, 1962 edition of the Corpus Christi Times where the pork rinds are treated as equal to the Cheese Twistees:

Of course, a bag of pork rinds will run you better than a nickel today, because the public has fallen in love with them. And why shouldn’t we?

Should you find yourself with any pork with a rind attached, here’s how you turn it into pork rinds: