This is probably a good time to get to know Catherine Nichepor a little better. 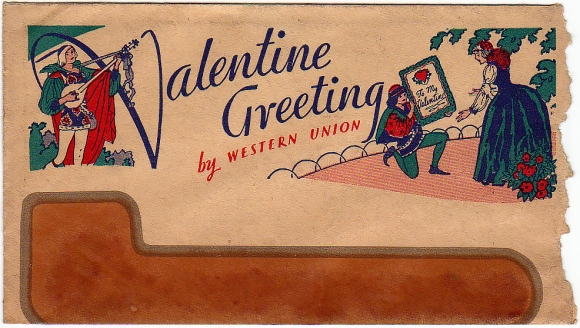 I’ve mentioned before that it has been tricky to find information about the owner of this box, Catherine Nichepor; that name doesn’t appear in the census, as far as I could tell. But there was a clue out there: a photo of a burlesque dancer scanned and uploaded by Vintage Burlesque Photos on Tumblr, signed “To Sonia, Hit Parade of 1936, Catherine Nichepor.” The photographer’s mark says “Chicago.”

By itself, not especially compelling evidence, but there was one more thing–the way she formed the letter “C” in her name.

Notice the cross on the tail of the “C”? While it’s formed in two different ways, the odds of two different Catherine Nichepors adopting the same affectation seemed unlikely. So we knew she went from Kansas to Chicago and danced. From there and from other items I was able to pick up at auction, we’ve got a pretty complete picture of Catherine’s early years, and that tells us a lot about who she was and this valentine. 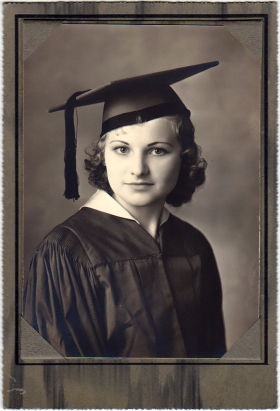 Catherine was the daughter of Russian immigrants; in elementary school, she went by Katrina Nichepor, then Cathern in middle school, and finally settled on Catherine in high school. (But there was one more name she’d use later on.) The recipes we’ve got look like they’re from home economics classes from her middle school and high school years.

Her parents operated a general store; in one letter, a high school suitor wonders if her parents mind if he calls her on the store phone.

She graduated from Wyandotte High School in 1933, a year after her elder sister Sophie (later Sonia). Sonia and Catherine both grew up dancing, and danced together in festivals at their Russian Orthodox church.

But Catherine started her dancing career. Here’s a copy of a contract from 1935.

Catherine danced under her own name and occasionally under the name Kay Nichols; she kept a scrapbook with newspaper clippings of some of the shows in which she performed, including the Hit Parade of 1936 in the autographed photo she sent home to her sister.

I haven’t scanned the whole scrapbook yet, but here are a few of the clippings. Notice how the picture of Catherine with her hand on her chin in the third scan appears in the ad for Hit Parade of 1936 in the second scan?

Catherine met her husband, Michael Carl Marian, in Detroit in 1936, when she was 21 and he was 32. Michael was Romanian by birth and owned a successful dairy business. From a clipping in her papers:

By 1940, she appears in the census in Detroit under her married name, no profession listed:

But if Catherine didn’t meet her husband until she was dancing in Detroit after high school, then who sent her this telegram in 1932, her Junior year? My guess is a high school beau, Gordon Thorpe. Gordon was a classmate of Sonia’s.

Catherine saved a bunch of his letters, including this one:

Yes, I know–this letter doesn’t look like it came from a poet. But Gordon didn’t need to write a poem to send this telegram–he just called up Western Union and ordered the number six. Here’s a blurb from a story that mentions this style of valentine, from the February 10, 1927 edition of the Edwardsville (Illinois) Intelligencer:

And the menu, in case you wanted to order something other than the number six:

Sorry, Gordon. I guess it wasn’t Raymond Randall you needed to worry about. And if you’re keeping score, Western Union’s track record in relationships is now 0 and 2, if The Five Americans are to be believed.


We’ll learn more about Catherine soon. Here’s a full-size scan of the valentine you can click to enlarge. 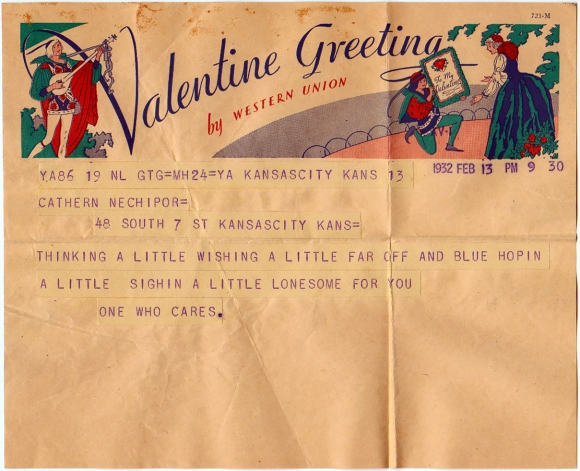