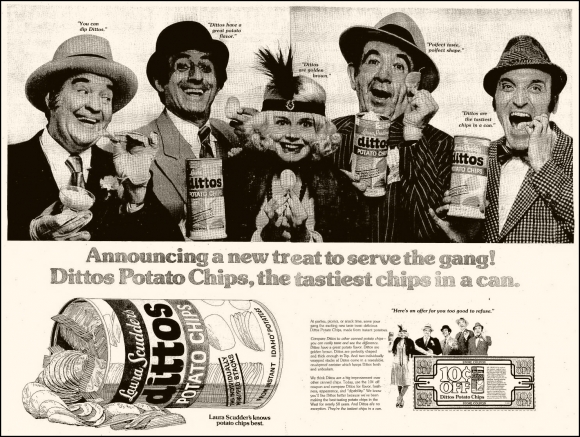 Born in Philadlephia in 1881, Laura Clough was working as a student nurse in Trenton, New Jersey in the first decade of the 1900s. (Which is random and fun, since recipe box owner Ferna Mae Jones was also a student nurse, as we learned in the post for make-ahead cocktail meatballs in this box.)

While working at Mercer Hospital, she met produce farmer and inventor Charles Scudder as a patient. He was a widower and 21 years older than the then-26-year-old Laura, but they married in 1908 and moved to the West Coast in 1910. After living in Seattle and San Francisco, in 1913 they moved to to Ukiah, California. In 1915, the Scudders bought the Little Davenport Cafe at 111 Perkins Street in a location now occupied by Schat’s Bakery Cafe.

Across the street is the Superior Court of Mendocino County in the Ukiah courthouse building. Because of the proximity (and because of Charles’ pancake-flipping skills in the large windows facing the courthouse), lawyers and judges would frequent the Little Davenport. Her legal clientele would encourage the exceptionally sharp Laura to consider a career as a lawyer; she’d originally intended to be a doctor, but found the cost prohibitive, which is why she went to nursing school in the first place. 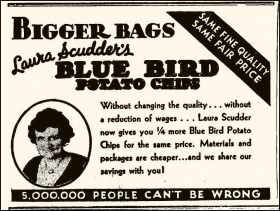 Now, in most states, you don’t technically have to go to law school to pass the bar–but I’ve never met anybody who knew anybody who’d even tried to take the bar by “reading the law,” which means undertaking a set of self-directed study. Nevertheless, Laura Scudder decided to “read the law” and passed the California bar in 1918.

After a fire shut down the Little Davenport Cafe, the Scudders bought a gas station in Monterey Park. They bought a brick building on Garvey avenue but couldn’t find a tenant for it, and in 1926, Laura decided she’d make and sell potato chips from it–in a significantly new way.

At the time, if you wanted potato chips, you went to your local store and there’d be a big barrel of chips; you’d take what you wanted and pay by the weight. Naturally, this meant the difference in quality between the top of the barrel and the bottom of the barrel was substantial. (Compare Eda and Edward Snyder II, the first generation of the Pennsylvania Snyder snack companies, who would sell fresh kettle-cooked potato chips door to door.)

Laura instead sealed her chips in wax packages. Of course, since no one had done that before, you couldn’t just order a bunch of wax bags for potato chips; instead, the female employees of the company took home wax paper to iron them into bags that she then filled the next day.

A few years later, after switching to moisture-proof cellophane, Laura added fresh-dates to her packages, making it the first fresh-dated food product on the market. (An odd wrinkle from this period: after Charles Scudder died after being run over by a truck he was working on in 1928, Laura married his son from his first marriage, Charles A. Scudder, in 1929.) Then she moved into mayonnaise and peanut butter, emphasizing the purity of the products.

The company used the slogan “The Noisest Chips in the World” to contrast their freshness to the bulk chips they replaced. Here’s Laura in a 1950s commercial:

Laura sold the company in 1957, passing up an $11 million offer from the Sunshine Biscuit company to take a $6 million offer from the then-recently diversified Signal Oil company. She took the lower offer because Signal promised not to fire any of her hundreds of employees. She died two years later, in 1959.

So… what about Dittos?

In 1967, General Mills launched a product called Chipos–potato chip-like crisps made from dehydrated potato flakes packaged in a box. Makers of traditional potato chips sued to prevent General Mills from using the phrase “potato chip” on the box, claiming that these machine-formed versions weren’t the genuine article.

In 1971, a Federal district judge ruled that General Mills could call their Chipos potato chips as long as the package had a disclaimer stating that they were made from dehydrated potatoes. After the ruling, every chip manufacturer tried to get in on the perfectly-formed-identical-chip action. While Proctor and Gamble ultimately came to dominate that market with its canister-protected Pringles, Frito-Lay’s Munchos are still on the market, too.

Laura Scudder Incorporated, at this time owned by the Signal Companies (successor to the Signal Oil company, following a 1960s diversification into other businesses), entered the preformed chip market, too, with Dittos–so called because they were exact copies of each other.

Mix all excepting almonds. May refrigerate day before after placing in 9 x 13 baking dish. Before baking add 1 cup grated cheese over top plus 1 package of Ditto’s potato chips (broken). Almond over all.