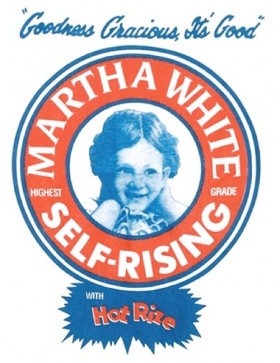 If you’re from the Southern states, you don’t need any introduction to Nashville’s own Martha White flour and cornmeal, particularly the self-rising variety with Hot Rize (a trademark that seems to refer, in essence, to an aluminum sulfate baking powder).

The Martha White name came from Richard Lindsey, the owner of the Royal Flour Mill in Nashville. Around 1900, he named the finest grade of flour the mill produced after his 1-year-old daughter, Martha White. The name really picked up after the mill was sold in 1944 and the new owner renamed the company after its most famous product.

Part of the reason it’s become such an institution is its long-running sponsorship of Grand Ole Opry programs, a relationship that dates back to 1948, where $25 bought a stage backdrop and a mention on the radio show.

The sponsorship became even more valuable in the 1950s, when it included the Flatt & Scruggs Grand Ole Opry Show:

So, what happened to Martha White?

I usually do this much research when I post from census stuff, because I want to be right, but I don’t always include that in the post. I don’t know why I’m doing it here, other than to say that I really wanted this to turn out differently, and maybe you’ll see something I missed.

In 1900, when Martha was 1, her mother Katie [Jordan] and father Richard Lindsley (note the different spelling) lived with Richard’s parents. Both Richard Lindsey and his father were listed as merchants (thanks to Susan at A Cake Bakes in Brooklyn for translating that for me!).

By 1910, Katie was now called Catherine, the Lindsleys were now the Lindseys, and Richard’s mother Mattie was the head of the household:

By 1920, Catherine had become Kate, Richard Jr. was born, and Richard was the head of the household:

By 1930, Richard is a county court clerk, Kate is gone, and Martha is married to Dr. George Russell, a dentist, and has a daughter:

Note that I couldn’t locate any marriage record, but that’s not entirely unusual–these records weren’t exactly kept in a vault. More like musty books that may or may not be digitized by now. It’s also possible the two were practicing common law marriage by cohabiting, but Tennessee did not then, and does not now, recognize common law marriages (although you can marry your first cousin, so it’s a weird place to draw the line, don’t you think?).

By 1940, Martha and George are living in their own place with three children, including a pair of twins where the girl is named after Martha’s mother:

So if this is, indeed, the life of Martha White Lindsey Russell, then this is the rest of the story. As much of the rest as anybody knows, anyway.

From the December 27, 1949 edition of the Biloxi (Mississippi) Daily Herald in a wire story with the headline, “Memphis Woman Is Found Dead in Wooded Park:”

Evidently, these circumstances struck the police as odd based on the first couple of grafs from this wire story from the December 30, 1949 edition of the Kingsport (Tennessee) Times:

No more significant answers seem to have been forthcoming, however. In January, the death certificate was filed with the cause listed as: “Death from natural but as yet unknown causes.” 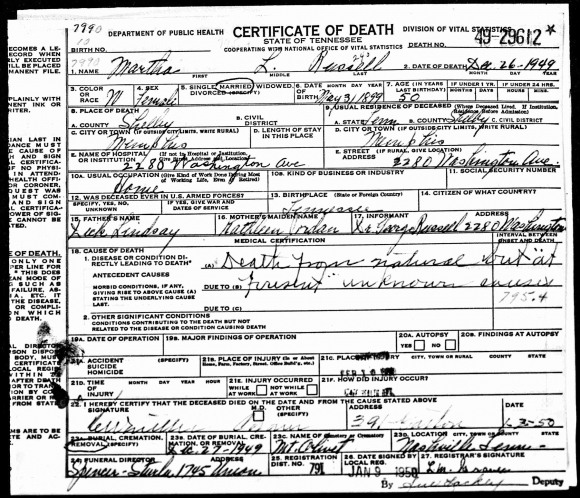 If you’re wondering, 795.4 is a reference to the old International Statistical Classification of Diseases and Related Health Problems version 6 (ICD-6). At the time, 795.4 referred to “Died without sign of disease.” It’s slightly more specific than 795.3 (“found dead, cause unknown”) and 795.5 (“other unknown and unspecified causes”).

Can’t let it end like that, can I? Well, here’s a better way to remember Martha White, with a holiday recipe:

If batter seems too thick, add a little more liquid.