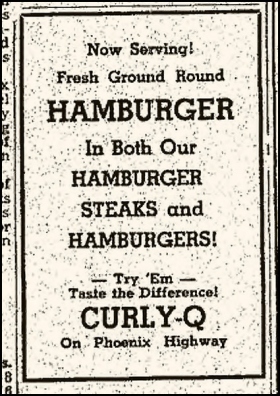 Typically when you encounter ground beef, it’s made of a combination of (bottom) sirloin and chuck. Sirloin is not too tough and not too flavorful; chuck, meanwhile, is full of connective tissue, but tastes great, particularly with long cooking times. The combination produces a reasonably flavorful ground beef that has a great balance of fat, between 15% and 30%, depending on the proportions.

We talked a bit about the round of beef in the post for round steak superb from Kent, Ohio. The round is three muscles which are as leaner than chuck (ground round has about 11% fat) but in most cases have even better flavor. If you’re going to use them in an application where you add fat–like a meatloaf when you’re adding sausage or pork fat–it’s a far better grind than the sirloin/chuck combination. And if you’re the kind of person who picks up lean beef for your standard burgers, do yourself a favor and switch to ground round.

Ground round has been a favorite for decades. Compare the above recipe with the one from the September 9, 1935 edition of the Clovis, New Mexico Evening News-Journal

In the late 1960s, the Howard Johnson’s company (then being operated by the founder’s son) started a chain of restaurants called the Ground Round, some of which still survive as part of a franchise-owned LLC. The 1970s and 1980s iterations of the concept had popcorn at the tables, silent cartoons projected on big screens, and basic American fare.

But my favorite mention of ground round requires a little setup. In 1947, Alex Schoenbaum opened a drive-in next to his father’s bowling alley in Charleston, West Virginia. In 1952, he became a franchisee of the Big Boy chain. Schoenbaum sold sub-franchises to restaurant owners throughout the Southeast, eventually making a third of the Big Boy restaurants effectively Shoney’s restaurants.

Among the menu offerings you could get specific to the chain, there was one called the half pound o’ ground round, shown here in this advertisement from the November 27, 1968 Charleston (West Virginia) Daily Mail: 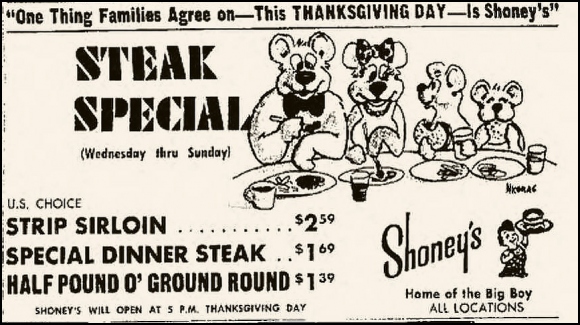 That item was then immortalized in a country song by legendary country singer-songwriter Tom T. Hall:

Because Big Boy franchises granted in other states limited the expansion of Shoney’s, the chain dropped the affiliation in 1984 to expand into Florida.

Put milk and raw egg over bread crumbs to soak them. Add rest of ingredietns and mix with hands and form into loaf. Pour ketchup over and let set 1/2 hour.