Cape cod and cranberries are a classic combination. 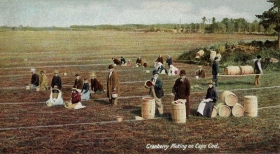 Its creation was announced in the December 1, 1904 edition of the Wisconsin Valley Leader (Grand Rapids, Wisconsin):

The Cape Cod Cranberry Company would come to market, among other things, a canned cranberry sauce under the brand name Ocean Spray starting in 1912.

In 1930, the company merged with A.D. Makepeace Company and a company named Cranberry Products to form an organization called Cranberry Canners. In the 1940s, it expanded to other states and took the name National Cranberry Association.

In the 1950s, Canadian members joined, and the organization changed its name one last time in 1955 to leverage its most famous brand: Ocean Spray.

For more on fresh cranberries, see the post for whole cranberry sauce from Kent, Ohio.

Blend thoroughly; do not beat. Fold in cranberries, orange juice, and nuts and bake in greased loaf, 1 hour, at 325 degrees.