A sugar and molasses cookie with an obscure brand mentioned. 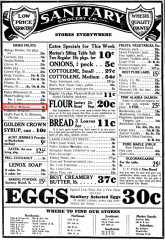 Don’t feel bad if you’ve never heard of Red River Molasses–neither had I. Advertisements for the product (including this one from the November 7, 1912 edition of the The Washington Times) seem to have appeared in newspapers only between 1908 and 1922.

I don’t talk much about this part of the Yesterdish process, but it’s details like this that really help identify who the owner of a box is. Believe it or not, I found multiple A.D.s and Cora Zimmermans, close in age, and close in proximity, in the states this box traveled through. But only one of those pairs would have been in Ohio between 1908 and 1922; curiously enough, they were two years apart in age, lived two counties apart, and were both originally from West Virginia.

If you want to do this the authentic, early 20th century way, you actually don’t cream the traditional way.