And a bit about the first Reform Jewish cookbook. (Yes, I know it looks awkward, but I believe that’s the correct tense. The name of the movement is present tense, I think.)

That’s actually an interesting cookbook, if you feel like flipping through one. 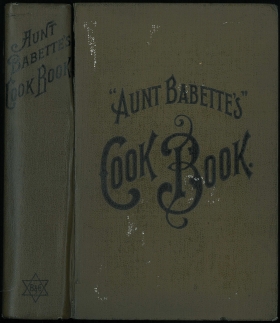 It was published by Bloch Publishing Company, founded in Cincinnati by Edward H. Bloch, an immigrant from what is now the Czech Republic. Bloch’s sister Teresa was married to Rabbi Isaac Mayer Wise.

Wise was something of a complicated character, and he’s not exactly crucial to this story, but I’ll give you a little bit about him. Also from what is now the Czech Republic, he came to the states in 1846 with a burning desire to theologically unify the various Jewish populations in the U.S. On the negative side, this caused him to prevaricate on the divisive issue of slavery–a peculiar decision for a man who hypothetically followed the teachings of Moses, who, last I checked, had picked a side on that topic.

On the positive side, however, Wise favored a looser interpretation of Judaism in general, one that didn’t divide the community over issues like the nuances of what constitutes kosher food. (I think non-Jews tend to think that the laws of kashrut are ancient and uniformly understood, but it’s precisely because they’re ancient that there are disagreements as to what specifically the language was intended to mean.)

Bloch published Wise’s essays, and through that practice came to be the leading publishing house in the movement that would come to be known as Reform Judaism. “Aunt Babette’s” Cook Book is part of that movement; while the book contains a lot of information about Jewish cuisine, it isn’t connected to any one community of Jews, and many of the recipes aren’t kosher, even calling for shellfish and pork at times. It could be due to its appeal to non-kosher audiences that it became the first really successful American Jewish cookbook.

Back to the recipe–I’ve seen a brown-sugar version of these under the name “Prize Cookies” or “Prize Winning Cookies,” usually also in Ohio, which is probably where this recipe card was written, based on the timing. For example, here’s one from the August 7, 1935 edition of the Elyria (Ohio) Chronicle Telegram:

Here’s a half-brown, half-white sugar version from the October 18, 1977 edition of the Dover (Ohio) Times Reporter:

[Note: Recipes of this age frequently didn’t include flour measurements; you added flour until it looked like cookie dough. I’d suggest starting with 4 cups.]

Dissolve soda in sour milk. Add to the sugar and eggs.

Sift baking powder and flour. Add to the rest.