An update to a recipe from childhood. 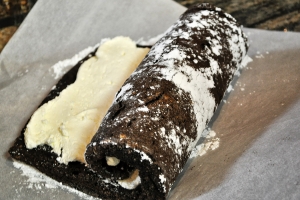 When I was about four, my preschool class assembled a book of recipes; my mother’s submission was the Chocolate Toasted Almond Roulage cake also posted today. (If you haven’t read that post, you might want to start there, because it explains why I chose this to celebrate Yesterdish’s 1000th recipe.)

In the three decades since, the techniques and ingredients for how we make the cake have shifted and evolved a bit.

This post and its companion from 30 years ago are celebrating the 1000th recipe posted on Yesterdish. And we’re just getting started.

I tried several attempts at making the roulade in the 12-by-18 pan the 30-year-old recipe suggested; each time, the cake came out about the thickness of a magazine, which was delicious, but resulted in something more like a pastry than a cake. A smaller, more traditional pan was in order. 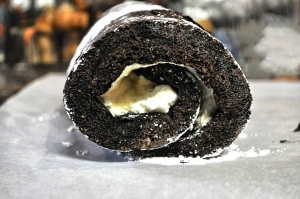 We’ve also generally moved on to powdered chocolate rather than melting chocolate and mixing it with coffee, which gives it a cleaner flavor. And for two reasons, we’ve dropped almonds: one, my sister is allergic to them now, and two, my dad doesn’t like the texture of the crunchy almonds hidden in the rich cake. Which I can understand, although my preferences are more along the lines of, “More everything, all the time.”

I’ve commented before that I’m not generally someone who bakes a lot of desserts; that’s partially because my mother and sister are fantastic bakers, and partially because, if there’s a cake sitting around, I’ll probably eat it. My mother stepped in and demonstrated her modern technique for this old recipe.

She also offered some tips for the techniques in play: 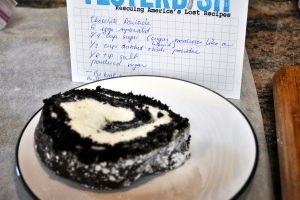 The pictured version also uses double the whipped cream, because my dad likes whipped cream. My sister would use powdered chocolate instead of powdered sugar to invert and roll the cake; she prefers desserts that look clean and tidy.

I rather enjoy the mottled, white-and-black effect of the powdered sugar. It’s kind of a baking in-joke. The famous bûche de Noël, a holiday roulade with a name that translates to Yule log, is meant to look like it has bark; I find it funny, and interesting, that the powdered sugar creates a tree that looks like a birch.

I think that it looks modern and organic. But if you want something traditional and pastry-shop looking, use the powdered chocolate to roll it, or cover it evenly in powdered sugar.

This post and its companion from 30 years ago are celebrating the 1000th recipe posted on Yesterdish. So far, Yesterdish has been around for 241 days; it’s been updated every single day, including weekends and holidays. And we’re just getting started.

While there’s no right or wrong on making the fillings, here are a couple of suggestions. Start with 2 cups of whipped cream. While whipping, add one (or more, if you like) of the following: