Of course, we aren’t really talking about Chinese noodles. Not in the sense of noodles from China, anyhow. 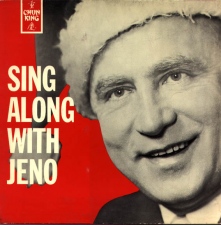 What the recipe calls for are deep fried chow mein noodles, an entirely North American creation. These are egg and wheat noodles (although they don’t have a high enough egg content to qualify as “egg noodles,” technically). And this crunchy salad owes a debt to three people: one from Minnesota, one from Michigan, and a man from South Korea being educated in Michigan.

Jeno Paulucci was born in 1918 in Aurora, Minnesota. He worked in grocery stores growing up, and apparently spent a lot of time looking at the shelves. During World War II, he served in the Pacific, where he watched his fellow soldiers devour then-exotic Chinese food. In 1947, he invested $2,500 in starting a company to make shelf-stable Chinese meals. He named the company Chun King, supposedly because he thought it sounded like it could be a Chinese city. 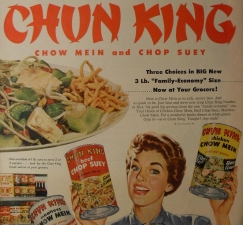 Making things safe to eat without refrigeration is tricky business, even today, and much more so in the 1940s. If you wanted to sell chow mein, for example, you could put the chow mein in the can, but you had to figure out what to do with the noodles.

But someone had already figured out what to do, which brings us to Michigan.

New Il-han and Wally Smith started a company in 1922 called La Choy. They had been growing bean sprouts together, then selling them at a grocery store Smith owned. Bean sprouts being delicate, they realized they needed to can them to preserve and ship them further distances. The company expanded, and in the 1930s, was selling canned, fried chow mein noodles (although Smith had been killed by lightning two years before the ad at the left actually ran.)

So what made Chun King’s contribution as interesting as La Choy’s? A piece of tape. La Choy sold the cans separately. Chun King attached the cans together and sold them as a ready-to-eat meal, dramatically increasing its popularity.

Jeno sold Chun King to R.J. Reynolds in 1967 for $63 million in cash, but he keep on cooking. Later contributions would include Jeno’s Pizza Rolls and a frozen food company he named after his mother, Michelina’s.

La Choy eventually packaged their products the way Chun King did. And then, this happened…