A weird product a weird history and weird marketing. 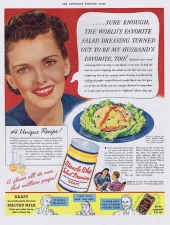 Kraft’s story is that it invented Miracle Whip in-house, when one of their employees made a machine he called the “miracle whip” that whipped the emulsification into a shelf-stable state, and that they named the product after the machine. But Kraft already had a line of “Miracle” salad dressings, so that seems to be a little bit too cute.

Meanwhile, an Illinois man claims he sold Kraft the recipe two years before it debuted. Kraft confirms they bought salad dressing recipes, just not this salad dressing recipe. Fair enough. But it’s hard to give any credit to Kraft’s origin story when it’s claiming the nickname of the machine just happened to include the existing trademark they already used for salad dressings.

Miracle Whip was introduced at the 1933 World’s Fair, when the better-living-through-chemistry attitudes of the 1930s rewarded things like secret recipes and food products that only somewhat resemble nature. It endured partially because it’s slightly lower in fat than mayonnaise (which is why it isn’t mayonnaise–it doesn’t meet the 65% vegetable oil by weight requirement of the FDA) and partially because people raised on Miracle Whip tend to think that condiments ought to taste like Miracle Whip.

But if there was a prize for the most desperate, insulting, obnoxious food and beverage marketing, and nobody remembered that Dr. Pepper exists (misunderstand this: raisins, you taste like raisins), Miracle Whip would take the crown. They recently paid to be included in Lady Gaga’s “Telephone” video, a video where she is, at other times, feeding people poison.

They’re also using the tagline “don’t be so mayo,” as if Miracle Whip wasn’t basically sugared-up mayo. And that’s the real failure of the campaign. Miracle Whip is trying to position itself as a “bolder” alternative to mayonnaise, when in reality, if you wanted boldness, you’d be having Tabasco sauce, or Buffalo wing sauce, or mustard, or spicy ketchup, or basically every other condiment in the known universe.

Miracle Whip’s slogan might as well be, “Don’t Be So Mayo (But Still Be Pretty Much Mayo).”

There’s nothing wrong with that, mind you. The product is fine. It’s sweet, tangy mayo. Great, thrilling. But the idea that Miracle Whip is going to carve out a market by convincing people it’s a bold and different alternative… well, you know that girl who is a fan of the “bad boy” in a boy band? That’s your Miracle Whip enthusiast.

So basically, Miracle Whip is Donnie Wahlberg, and they’re trying to market it like it’s Sid Vicious.

Beat all together with mixer. (Good for cabbage, potato, and egg salad.)