There’s more than one way to frost a grape.

A similar recipe for frosted grapes appeared in the Sept. 29, 1917 edition of The Toledo News-Bee. (I kept the two items immediately after it intact because something about the net effect struck me as particularly “period” about the newspaper. Click to zoom.) 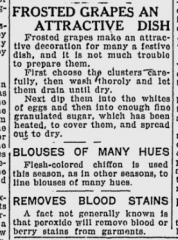 But other methods of frosting grapes exist, and particularly proliferate in the 1950s and 1960s, when the grapes became popular to use as garnishes or centerpieces. The May 13, 1956 edition of The Milwaukee Sentinel has a frosted grapes recipe that calls for dipping in cream and then sugar. Forty-seven years ago tomorrow, the Feb. 6, 1966 edition of The Miami News suggested frosting grapes with egg white and powdered lime gelatin to garnish a Valentine’s day cake.

Dip grapes in frothy egg whites–then in granulated sugar–lay on rack a few hours to dry.