Man does not live by last week’s French bread alone, after all. 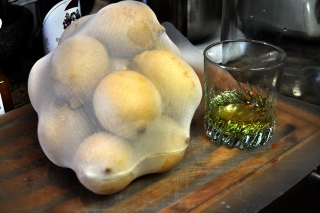 Last October, the Limoncello recipe in the New York Times Magazine food blog made the rounds with my friends on Facebook. Now, sometimes when I see a recipe I like, I save the link or print it out and I put it in a box or tuck it into a cookbook and it sits there for a year or two until a special occasion happens. But when I saw the limoncello recipe, I called my family and we started preparations that night.

If you have company and they say they don’t like lemons, kick them out, because they’re either dumb or lying, and either way, you don’t need that kind of company.

A couple months later, it came out perfectly, just in time for the holidays. Tart, sweet, and smooth, with a good bit of pucker. If you’re going to nap anyway after a large meal, a chilled glass of limoncello won’t hurt the process. 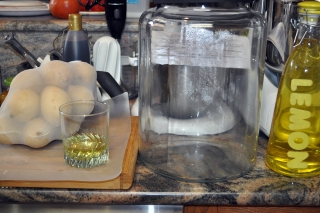 In some ways, limoncello is the perfect liquor to have on hand, because it goes with everything and everybody. You can serve it to formal company and it’s more than special enough to hold its own against your scotch; you can pour it into a half-empty can of Mountain Dew and it’s just as special. (If you have company and they say they don’t like lemons, kick them out, because they’re either dumb or lying, and either way, you don’t need that kind of company.) If you ever find yourself in my kitchen and the lights won’t turn on, you can find a bottle of limoncello on the top shelf of the freezer door.

Once again, my sister took the photos and wrote the card. That’s why you can read it. Also, when I was embossing the cards, I made a messy stamp of the tagline on this one? And I said, “Well, this’ll be perfect for the limoncello,” since it looks like your eyes are drunk when you see it…

Bind lemons in cheesecloth, gathering both ends together and tying with twine. Pour Everclear into the bottom of the jar. Secure end of cheesecloth under lid, then close lid, suspending lemons above spirit. Wait nine weeks; liquor will be bright yellow. (By magic?) Open jar and remove lemons. Dilute spirit with simple syrup to taste.

Based on the NY Times Magazine Food Blog’s recipe.