With cocoa, cinnamon, and nutmeg.

Last year, we looked at a recipe for sour cream cake in the box from Lutz, Florida, and compared it to a recipe from an 1894 newspaper. I was curious about even earlier iterations, so here’s one from the September 25, 1886 edition of The Elkhart (Indiana) Sentinel: 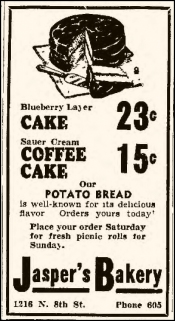 But then, that’s a sour cream cake that calls for yelks. Our box owner titled this a sauer cream cake, using the German spelling (as in sauerkraut, which is literally German for “sour cabbage”). You might well wonder if there aren’t recipes for sauer cream cake.

I haven’t found one yet, myself. So far, the only mention of anything like that is the advertisement to the right, from the August 4, 1939 edition of The Sheboygan Press. Still, 1939 would be right in the “sweet spot” for this recipe box, so it’s possible the alternative spelling was making the rounds.

But these are coffee cakes, still. A recipe with instructions that looks a bit more like what was intended here appeared in the August 14, 1941 edition of the syndicated “Household News” column by Lynn Chambers (this from the The Elma (Iowa) New Era):