Our first North Dakota recipe takes us to… West Virginia. Hey, sometimes, it works that way. 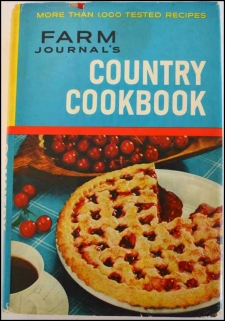 I can’t say I’ve seen too many fried chicken recipes that involve basting with milk. Looking for any explanation of how this might work led to a 2011 post on One Perfect Bite, where Mary wrote that she originally made this recipe from a Farm Journal cookbook “nearly 50 years ago.”

Fair enough. In 1961, I think there was only one Farm Journal cookbook in print, the one at the left, published in 1959. And it does have this chicken recipe in it, and that’s probably where our recipe box owner in North Dakota got it.

But the Farm Journal cookbooks were collections of recipe submissions. So where’d the original recipe come from?

The earliest mention of this recipe that I’ve been able to find–and the only one predating the cookbook–is in the September 17, 1957 edition of The Charleston (West Virginia) Gazette, as part of their annual “cook book” insert: 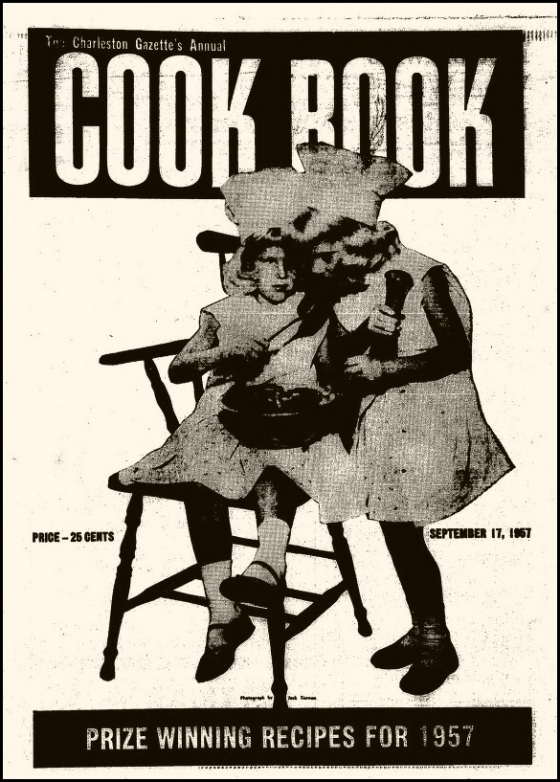 She married Homer on November 29, 1923. Here’s a wedding announcement from the December 2, 1923 edition of The Charleston (West Virginia) Daily Mail:

In 1930, Mabel’s father gave her a bit of land in Big Chimney. From the July 3, 1930 edition of The Charleston (West Virginia) Daily Mail:

For reference, Big Chimney is about seven-ish miles Northeast of Charleston, and the New York Central railway followed the river from Blue Creek (about five-ish more miles Northeast) all the way to Charleston. Here’s a photo of Blue Valley from 1912–the bridge in the left of the picture would become the New York Central’s crossing point on the Elk:

The minister who married the couple, Rev. C. B. Jackson, held other services at the Big Chimney Baptist Church, so it’s a reasonable inference that Homer and Mabel were Baptists, at least at some point. But by 1933, Homer took over as at the pastor of the Clendenin Advent Christian Church. From the August 20, 1933 edition of The Charleston (West Virginia) Daily Mail

Later in the 1930s, Homer was preaching at the First Advent Christian Church in Charleston, and in the early 1940s, at the Elmore Memorial Advent Church, also in Charleston. By the 1940 census, he and Mabel had two children:

In the 1970s, Homer wrote a 16-page booklet titled The Two Adams about Advent theology. (The second Adam is Jesus. Don’t worry, that doesn’t spoil the ending–he discloses it in the opening.) He observes, among other things, that the Original Sin was Adam’s tasting of the forbidden fruit, not Eve’s tasting, because Adam received the commandment to refrain from eating the fruit before Eve was formed.

“Adam was the responsible person, instead of Eve. Nothing unusual occurred until Adam ate of the fruit.” — Homer D. Baxter in The Two Adams

Hey man, I’ll eat whatever kind of fruit I like.

Homer passed in 1982; Mabel followed in 2007. They’re buried next to each other in Sissonville, West Virginia.

Mix in small bowl and mix to a smooth paste with:

Brush chicken with above paste. Cover and store overnight in refrigerator.

Remove cover. Baste with rest of milk and bake about 30 minutes uncovered.

Very good. [Can anyone read the parenthetical at the top?]