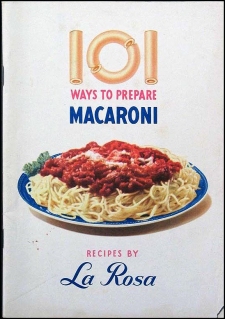 Sometime around the 12th or 13th century, the word maccheroni caught on in southern Italian dialects to refer to dried types of pasta. (The origin of that word is sort of mysterious and sort of complicated–Clifford A. Wright does an amazing and exhaustive examination on his site.) The word pasta (meaning paste) didn’t really come into use into the mid-to-late 19th century.

But in the 18th century–before that word came into use–Yankee Doodle was calling the feather in his hat macaroni (a slur intended to suggest colonists were unsophisticated and aspired to be effeminate foreign-food-fancying fops) (but not when we call each other that) (because we took it back). As the word pasta entered use, macaroni morphed into being any pasta with a hole in the middle, and then finally the elbow macaroni that Italians would probably call gomito meaning, creatively enough, elbow.

Long, hollow macaroni would’ve been most popular between 1900 and about 1940, and that’s probably what this recipe was intended to use.