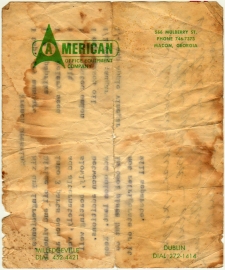 We discussed how the concept of a “French” dressing shifted from vinaigrette to something orange in the post for salad dressing from the Kent, Ohio binder.

Here’s a look at the back of the recipe. Hmm. I don’t think this is the same American Office Equipment Company which is around today and has been since the 1930s; the one at this address was incorporated in 1969 and dissolved in 1992.

And actually, the address is interesting, too. It’s the Militia Headquarters Building in Macon, which is on the National Register of Historic Places.

The Georgia Militia was actually planned before there was a Province of Georgia, and was then formed the year after the territory, in 1733. At the time, its basic purpose was to defend the territory against attacks by the French, the Spanish, Native tribes, and bandits. At the time, every male between the ages of 16 and 60 (with some exceptions, including clergy, ferrymen, and some state officers and their servants) who lived in Georgia for three months was required to take up arms to defend the territory or suffer a fine of ten pounds sterling.

The 1803 revisions changed the age window to 18 to 45, but added mandatory training requirements. Astonishingly enough, this first militia existed in basically that form until 1879, fighting in the Revolutionary War, the Mexican-American War, the War of 1812, various Indian wars, and the Civil War. Curiously enough, however, the militia didn’t mount any opposition to the Union marching to Macon after 1865’s Battle of Columbus–the militia, such as it was at this point in the war, was already fighting the Battle of West Point, and shortly thereafter, the Confederacy surrendered.

Actually, the Battle of Columbus was where Georgia’s own John Stith Pemberton got a saber wound to his chest that led to his addiction to morphine, which led to him experimenting with medicines to treat his addiction, which led to the development of an alcohol and kola drink, which, once certain counties turned into dry counties, led him to use a different active ingredient.

When he died, he was still addicted to opiates, too. But I imagine his famous drink did give him a bunch of creative new ideas about how to get morphine! Like, the best ideas ever! And I bet it was great for weight loss! And he could conquer the world and do anything, like teach it to sing in perfect harmony!

Add onion last. Keep in cool place but do not refrigerate or it will separate.

In beginning use no more oil than vinegar until it thickens, then after vinegar is gone, beat in oil well.