From Evelyn Warner, who felt it was very important that you know that.

The smaller card to the left was in-between the sides of this card, which folds in half (some people describe these as “tent-folded” cards). Evelyn Warner went through a lot of trouble to make sure we knew this was her recipe, so let’s see if we can’t learn a bit more about Evelyn.

The first thing that jumps out at me is the brand names. Wesson doesn’t tell us a whole lot, but the Mixmaster line of stand mixers by Sunbeam entered the market in 1930 and remained the dominant model in the market until the 1980s. The Mixmaster’s blender attachment, however, didn’t launch until around 1961–at least, ads from 1961 proclaim it as new.

That timeline makes sense with the ink. The ink is from a ball-point pen, and until the 1960s, fountain pens were were common. (Compare the writing here with the writing from a fountain pen in this 1930s recipe for hot water ginger bread.) That said, don’t let the ink color fool you when you look at recipe cards in general–fountain pen ink came in a variety of colors and some ink changes color as it ages. 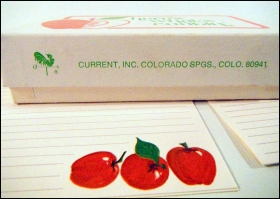 The card itself suggests a narrower window, however. The font and informality both seem like a 1970s card, and in fact, this is one of many designs from Current, Inc., a catalog sales printing company that started in the 1940s. Most of its recipe card designs date after 1967, when co-founder Miriam Loo retired and started writing cookbooks.

By the 1970s, we’d expect to see F.J. (the owner of this box) in the Kansas City area (see the post for cherry pecan upside down cake).

Searching for names didn’t turn up much of anything in Kansas. There were two likely candidates in Missouri; one of them lived in Cape Girardeau, on the far east side of Missouri, while the other lived in Buchanan, about 30 minutes away straight up Interstate 29 from where F.J. lived.

Here’s the most likely Evelyn Warner in the 1940 census:

For what it’s worth, listing her birthplace as Nebraska might have been a clerical error–it was listed as Missouri in the 1930 census.

And the recipe makes sense with that timeline, too, by the way. Here’s an all-poppy version from the March 24, 1974 edition of the Biloxi Sun Herald:

Add oil slowly, beating in mix-master constantly until all oil is used.