That is, a lot of the produce we use was created by mutations. And I don’t mean just accidental, gee-isn’t-this-an-interesting-random-variation mutations, like the Hass avocado we discussed in the post for avocado ice cream from Chicago.

I’m talking sudden, serious, Marvel Comics style mutations. Consider, for example, the Rio Red grapefruit, pictured above. The manner of the Rio Red’s creation went something like this:

No, really. But to explain how we used super-science to create super-mutant fruits and vegetables, we have to go back to the 1920s. In 1928, a study observed that exposure to X-rays could produce mutations in barley.

One year later, a pink grapefruit tree in Texas naturally produced a mutant fruit with orange-red flesh. That fruit, patented in 1933, would be marketed as the Ruby Red grapefruit. (No, I don’t know why people keep saying the patent was in 1934. Looks like the patent says 1933 to me.)

(Click to expand details of the patent on the Ruby Red grapefruit.)

The knowledge that genetic mutations could be induced, combined with the commercial success of the sweeter, more visually interesting Ruby Red grapefruit, led to an industry in plant mutations. In the 1940s, David Burpee of the W. Atlee Burpee Seed Corporation experimented with chemically-induced mutations using colchicine, a plant extract used to treat gout at the time. 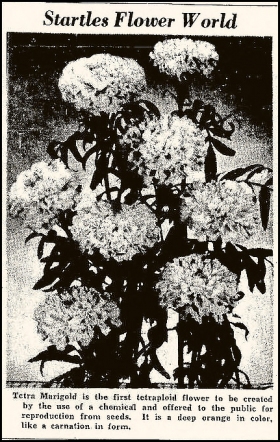 These days, it’s used as a gout treatment and in chemotherapy for cancer. That’s because colchicine interferes with chromosome segregation. During meiosis, when a cell divides into two gametes (like… y’know… the mechanical birds-and-bees bits and pieces that make babies), each gamete gets one set of chromosomes based on the pairs in the original cell. Except colchicine prevents them from separating, creating one cell without chromosomes and one with two sets of chromosomes.

In animals, one extra chromosome produces profound malformations; an entire set of extra chromosomes fails to produce a viable living cell. In plants, however, the results are more like the ones pictured at the above right. Burpee described them in the February 25, 1940 edition of the Salt Lake Tribune:

Hmm. A 1940s-era serum used to turn an ordinary specimen into something much stronger, taller, and heartier. Remind you of anyone you know?

In 1947, after the war, an army base on Long Island was converted into Brookhaven National Laboratory, a place where the Atomic Energy Commission could experiment with nuclear energy. The public’s imagination about the potential of nuclear energy was ignited, and it wasn’t forgotten that genetic changes in plants could be triggered by radiation (like the X-rays in the 1928 study). 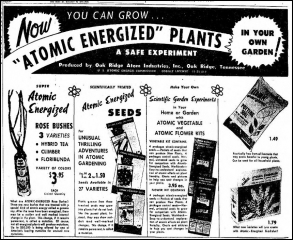 In the late 1950s and early 1960s, a former dentist named Clarence J. Speas used gamma rays from cobalt-60 to irradiate seeds in his backyard, which formed the basis of a business he named Oak Ridge Atom Industries. Ads like the one at the left ran in major newspapers. Unlike the other mutant plant products in this post, which were made by selecting the helpful mutations out of a range of experiments, Oak Ridge sold irradiated seeds with no real idea what the resulting plant would look like. At times, Oak Ridge offered cash prizes to its customers who reported a helpful mutation.

But helpful mutations bring us back to grapefruit, and Brookhaven. Remember how the 1930s-era Ruby Red grapefruit was orange-red? In the 1970s, botanists in Texas worked with scientists at Brookhaven to expose grapefruit seeds to gamma rays from radioactive cobalt. The mutants were planted, and in 1971, the Star Ruby grapefruit was developed from one of the mutant seeds–five times redder than the original Ruby Red and even more intensely sweet. In 1985, this was replaced by the Rio Red, a version that’s easier to grow.

Hmmm. Gamma rays from the 1960s producing dramatic color change and increased intensity? Why does that sound familiar?

We’ve moved away from random mutations and toward gene splicing (for better or worse) in our development of new produce, but that doesn’t mean the world has given up. China, for example. In 2006, sweet potato seeds aboard their second manned space mission were exposed to cosmic radiation as part of an experiment. The resulting hybrid, Purple Orchid Three, was briefly a culinary hit in China.

All of this makes me wonder… what the heck does Stan Lee put in his salads?!

Cut up grapefruit sections. Combine with some of dressing and chill overnight.

Mix with greens just before serving.