Have you ever heard the phrase, “Ship-shape and Bristol fashion?”

It dates to the early 1840s, though it describes a situation that had gone on for centuries. Bristol is a port town in Southwest England where the difference between high tide and low tide was over 40 feet. Consider that a late 18th century ship-of-the-line had a draught (size measured from waterline to the bottom of the keel) of around 24 feet, and the result was that, at low tide, ships in the harbor would rest on their narrow keel, then tilt to one side or the other.

The net effect was that anything not locked up, nailed down or tied securely on a ship in Bristol harbor would fall over and slide to whichever side the ship was tilted toward. Thus, Bristol fashion meant everything was secured in its place. (Note that it’s unlikely that actual sailors in Bristol used this phrase, as it only entered usage in the mid-19th century, after steps had been taken to mitigate this problem.)

(Just go with it, I’m going somewhere with this.)

This problem eventually led to Liverpool becoming a rival port at the end of the 18th century, as ship captains preferred not to have their cargo dumped out by a ship suddenly aground. In order to compete, in the early 19th century, construction of a series of locks and a floating harbor began to permit some control over the tide. The new harbor opened in 1809, but there were problems down the road as ships became larger.

In 1843, the SS Great Britain was constructed in the Bristol shipyards. It was the largest ship in the water, at that time, a fact that was brought into stark relief in July of that year, when the attempt to tow the ship to the River Thames where an engine would be installed failed because the hull was too wide to fit through the locks. It took until December 1844 to complete the modifications to the harbor to allow the ship to be moved and fitted with an engine, and the SS Great Britain didn’t set sail on its maiden voyage until July 26, 1845.

So why tell you this story? Well, it’s about bread and sailing.

Most Americans are generically familiar with stories about hard tack from learning about the U.S. Civil War–that it tasted like approximately nothing, that it was so hard that soldiers would have to break it with a rifle butt or soak it in coffee, and that insect infestation was a problem.

All of that was true for the hard tack they consumed in the Royal Navy, except that the sea air often softened the biscuits once they were removed from storage, both for better (for their teeth) and worse (for the mold and maggot implications). But there weren’t particularly good alternatives. As we all know, yeast like warm environments, which aren’t exactly in abundance on boats crossing the Atlantic. 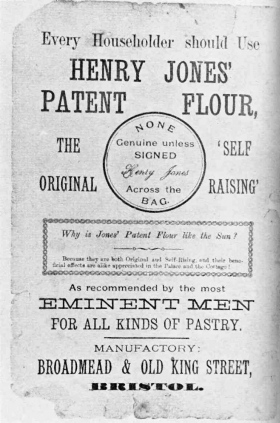 Henry Jones was a baker and candymaker in Bristol in the 1840s. In 1843, Alfred Bird (of Bird’s Custard Powder, which is another story entirely) designed modern baking powder to help his wife’s yeast allergy by mixing baking soda, cream of tartar, and cornstarch; two years later, Jones made the first self-rising flour (or, as it’s known across the pond, self raising-flour) by mixing the flour with baking powder and salt. The result was a quick bread that didn’t require yeast to be make.

Recognizing the applications at sea, Jones marketed his product using testimonials from ship captains and the like in an attempt to get contracts to supply the Royal Navy. A notice for the new flour appeared in the June 6, 1846 edition of the London Daily News:

Which brings us back to the SS Great Britain. In September 1846, about four months after this advertisement ran, she ran aground in Ireland due to navigational error. After being refloated, used to transfer Australian immigrants, and running aground again in the 1880s, she was eventually turned into a museum in 1970 and returned to Bristol.

Henry Jones fared better, becoming very rich on his invention. After Florence Nightingale championed the product, the Royal Navy ultimately approved its use around 1849, and it was used in the Crimean War.

We discussed self-rising flour in the post for beer bread from San Antonio, Texas.

Work up into dough. Flour waxed paper and roll dough out on waxed paper.