Root beer is good. Eating raw yeast is probably not as good. 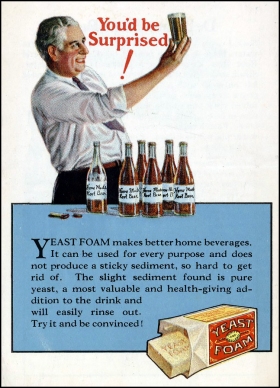 The Northwestern Yeast Company, in Chicago, was the market leader in yeast around World War I. The original company at Northwestern Yeast’s location was the George A. Weiss Malting and Elevator Company, which started operations in 1884.

The name, however, appears to have come from Egbert W. Gillett. Gillett came from a culinary family, of sorts; his father made extracts. The family moved from New York to Chicago when Egbert was five. Egbert’s “Magic Yeast” was first marketed in the late 1880s with the trademark of a moon and an owl. Meanwhile, in Wisconsin, brothers John and Henry Boyle had returned from learning to manufacture yeast on the East Coast and were working on their own brand of yeast, compressed cakes they called “Yeast Foam.” 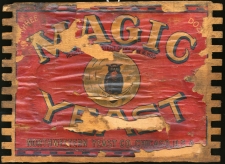 In 1893, the manufacturers came together and started the Northwestern Yeast Company, but continued to sell both Magic Yeast and Yeast Foam, and marketed as if they were competitors. (As a an article in Business Digest and Investment Weekly from May 15, 1918 noted, these decisions were made in the late 19th century, when breaking up monopolies was a priority for the government.)

This particular scrap of paper is likely an insert from a Magic Yeast package. It’s got a lot of advice, but let’s focus on two items in particular.

First, root beer. This method does work, and sometimes it’s done as a science experiment in college chemistry labs. It’s actually much closer to the earlier forms of root beer than most.

In the 13th century, people in England observed that those who could afford to drink fermented drinks were often healthier than the poor who had to drink unclean water. The reasons were unknown at the time, but involved both the fact that boiling the water is a step in brewing and that the alcohol might slow the growth of any pathogens that find their way in.

At the same time, children (and women, who were thought to be delicate) couldn’t be expected to drink beer all day without certain, possibly hilarious, but entirely undesirable side-effects. Probably singing.

Brewers started to produce small beer, which was a version with greatly reduced alcohol, either from re-using the spent mash of a regular run of beer or by using smaller quantities of yeast and shorter fermenting before consumption. While alcohol is present in these beers, if prepared correctly, the amount present should be about a ninth or tenth of what is present in a normal beer, a lot like the “no-alcohol” beers sold today.

By the 18th and 19th centuries in America, root beer was a class of these small beers prepared with flavoring extracts from roots, herbs, or berries. So what they’re proposing here isn’t that shocking. One caution, though–refrigerating the bottles will put the yeast back to sleep and stop the fermenting process. If you fail to refrigerate them, the yeast will keep converting sugar into alcohol (yay!) and carbon dioxide (boo). The carbon dioxide will ultimately cause your bottles to pop their corks/tops or explode.

While yeast is, indeed, a great source of many vitamins and is sold as a supplement at the health food store, the yeast they sell there is dead. Or “spent” or whatever other euphemism they use at the store to convince you to swallow a tablet of yeast that is no more, has ceased to be, has met its maker, has run down the curtain and joined the choir invisible.

Some sources say your stomach acid will kill yeast. Fun fact: the average pH of your stomach is less acidic than root beer. And we already know yeast love that. Other types of yeast are very happy in your body and this yeast likely would be, too.

It won’t kill you, unless you’ve got an allergy of some kind, but it’ll make you awfully gassy and taste like a giant mouthful of yeast. Whatever your health problems are, gastric distress will not cure them. But if you’re looking for somewhat more defensible ideas for yeast, the booklet this pamphlet advertises, The Art of Making Bread, is online.

The company seemed to have some antitrust problems in the 1940s and was sued by employees who claimed to have not been paid for overtime. I haven’t found its ultimate fate, but the factory was sold by 1950.

Soak 1 cake Yeast Form 1/2 hour in 1 qt. lukewarm water. Place in crock 4 lbs. sugar, one 3-oz. bottle Root Beer Extract and and 4-1/2 gals. lukewarm water. Strain soaked yeast thru cheesecloth. Rinse yeast left on cloth thor’oly with 1 qt. of water. Throw away solid particles. Add dissolved yeast and rinsing water to mixture in crock. Mix well and bottle at once. Fasten corks securely. Keep in warm place 6 days. Cool. Store in cold place. To be “ready” in less than 6 days, use 2 or 3 cakes of yeast and let stand 3 or 4 days before cooling.

Eat Three Cakes Daily
One Before Each Meal

Yeast Foam is a corrective food which helps keep you fit. Take it if you suffer from constipation, boils, pimples, indigestion, auto-intoxication, run-down condition, etc.

Easy to eat. Crumble a cake over your cereal in the morning. Spread with butter or jam like a cracker. Break and soak in glass of water or fruit juice. Any way you take it, there’s health and vigor in Yeast Foam.

For other recipes and information concerning yeast, send for our free descriptive booklet “The Art of Making Bread.” Use this coupon.

Delicious Home Made Bread, Rolls and Coffee Cakes may easily be made with Yeast Foam. Recipes for these and many other products are given in the booklet, “The Art of Making Bread.”

All measurements are level. Four loaves.

In the evening, break and soak yeast 20 minutes in lukewarm water. Mix with flour to thick batter. Cover. Let rise in warm place over night, 78 deg. F. Potatoes may be used in this sponge if desired.

Part of this bread dough, when ready to be shaped into loaves, may be made into plain rolls, Parkerhouse or Cinnamon rolls.

IF you wish a Quick Method for making bread with Yeast Foam, just send us your name and address on the opposite side of this circular. We shall gladly mail you our free recipe booklet, “The Art of Making Bread.”

Baking at home is much cheaper and so easy, too. Just follow our recipes carefully and you will surely be delighted with the results.

Hannah L. Wessling, formerly with Department of Agriculture at Washington, is head of our Home Economics Department. Write her at 1750 N. Ashland Avenue, Chicago, for any information concerning bread, rolls, etc.