A meat and gravy casserole.

Compare this version to the slightly more cottage pie-inspired version from The Woman Suffrage Cook Book by Hattie A. Burr c. 1886:

As the name implies, The Woman Suffrage Cook Book was a fundraiser to support the growing women’s rights movement, but it was also a sophisticated political argument. Burr wrote: Among the contributors are many who are eminent in their professions as teachers, lecturers, physicians, ministers, and authors–whose names are household words in the land.

Burr’s argument, unpacked, seems to be, “If you trust a woman to feed you, and the same woman is also a trusted professional, isn’t it silly not to trust her to vote?”

Fair enough. So who was Ella C. Elder? 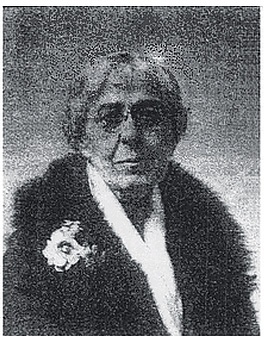 Burr published the book in Boston around 1886. In 1886, Ella C. Elder lived about a hundred miles west, in Florence, Massachusetts, teaching at a private philanthropic kindergarten called the Hill School. In 1891, she took a job in Buffalo, New York; when the schools there were converted into a public school system, she was the first supervisor of kindergartens (something like a mini-Superintendent).

Unfortunately, Elder should have ended her political activity with suffrage. She went on to urge her Kindergarten Teacher’s Union to oppose comic strips, because they, and I quote, “inculcate bad morals,” “incite children to rebellion,” and “represent a low type of art.” Here’s a mention from the May 11, 1907 edition of the Brownsville (Texas) Daily Herald:

Really, Ella? So, just to be clear, you submitted a “recipe” that consists of putting leftovers in a dish and baking them, and it’s comic strips that are a low form of art. Just to be clear.

Here’s an example of what Elder was so worried about, from the January 1, 1900 edition of the Troy (Illinois) Tribune:

Sorry. I don’t like censorship. I’m sure the casserole is fine.

Cut cold meat into small pieces. Season to taste and moisten with gravy.

Make in layers with bread crumbs and bake 20 to 30 minutes in a hot oven or until the crumbs are brown.