Talk about leaving money on the vine. 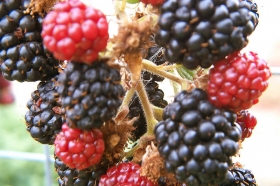 In the early 1920s, Charles Rudolph Boysen was the Anaheim City Parks Superintendent with an interest in growing and breeding berries. In 1923, he crossed a dewberry-and-logan-berry hybrid with raspberries and blackberries, producing a large, sweet, juicy, dark berry. Unfortunately, Boysen broke his back in 1928 (sliding down a fire pole, of all things) and was forced to abandon his farm work. Before leaving his farm, he gave a cutting of his berry to a local nursery.

The nursery owner thought it was interesting, and sent a note to the USDA.

In 1932, a USDA strawberries expert named George Darrow from Oregon was visiting Southern California and remembered the note he’d gotten from the nursery owner. The vine at the nursery had died, however, so Darrow went looking for the farm, enlisting the help local farmer and unofficial berry expert Walter Knott. Knott visited the abandoned site of Boysen’s farm and found a few vines that were, in Princess Bride terms, only mostly dead.

Knott nursed them back to health, and, finding the berries to be delicious, started selling them from a roadside stand in Buena Park, California. Needing to call them something, he named them after the former farm owner who had created the hybrid: boysenberries.

Knott’s stand started selling pies, berries, and jam. Then, Knott and his wife opened a small restaurant and sold fried chicken along with the pies. Because lines to get in to the restaurant were so long by 1940, he built a Wild West “ghost town” out of buildings moved from abandoned pioneer towns, so the people waiting for chicken and pie would have something to do. Over the years, Knott added s cable car, a few rides, demonstrations of pioneer living and the like, but even though Disneyland opened eight miles away in 1955, Knott didn’t charge admission to his Berry Farm until 1968.

Mix the above together and pour over berries (3 cups).

Pre-bake favorite pie crust for 4 minutes at 400 degrees. Cover bottom of the crust with 3 cups of berries (frozen).