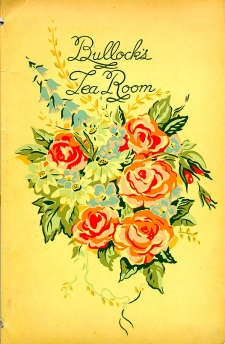 This recipe is probably best remembered as Heavenly Lemon Pie, which was the name it traveled under when it was served in the tea rooms of Bullock’s department stores in California. Bullock’s, founded in 1907, was a full-service department store in its heyday, meaning you could buy a suit or a dress, get your shoes shined, get a haircut, and have lunch without going outside.

Not that the practice has vanished entirely; Nordstrom has an restaurant division, for example. I’ve lived about 50 feet from Nordstrom for the last decade, and they have the best coffee in the neighborhood.

Bullock’s was bought my Macy’s in the late 1980s and the chain was functionally dissolved in 1996 (with remaining stores re-branded as Macy’s). But like any restaurant or dish, the memories of food fade slowly. Those who remember Bullock’s tea room tend focus on three desserts: coconut cream pie, orange rolls with orange glaze, and this pie.

Although it did change names, a bit. An almost identical recipe appeared under this name in the July 13, 1941 edition of the Albuquerque Journal as part of a magazine insert feature from the Good Housekeeping Institute titled “Working Refrigerators Overtime.”

This doesn’t seem to have been the standard name for all that long, however. Here’s an unrelated heavenly pie from the December 20, 1932 edition of the Elyria (Ohio) Chronicle Telegram:

By 1947, it was traveling under the name lemon angel pie in the syndicated “Household Memos” column by Lynn Chambers (this clipping from the April 3, 1947 edition of the Akron (Iowa) Register Tribune):