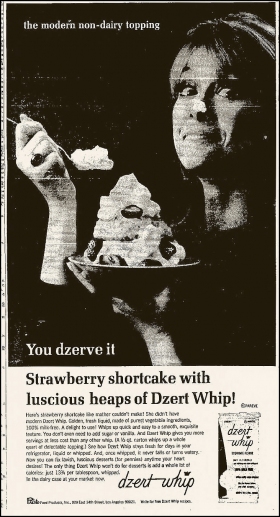 Ads for Dzert Whip appear in newspapers between 1961 and 1967, with one mention in a recipe from 1973. That said, I’m not entirely sure what it was made from. The impression that I get from the advertisements is it’s a non-dairy liquid that you whip up.

For the record, while this ad promises us that Dzert Whip is calorie friendly because it’s only 13-3/4 calories per tablespoon, checking the label on a can of spray whipped cream will reveal that cream is 15 calories per two tablespoons.