One of the earliest Japanese foods to be adopted by the American public.

Oyako donburi, sometimes abbreviated oyakodon, translates to “parent-and-child bowl.” Oyako is literally the phonetic name of the kanji representing parent and child relationships, and is even occasionally used as a first name, something akin to naming a child “Love.” In this context, however, it refers to the fowl involved; oyako donburi is a chicken and egg dish.

While we opened Japan to trade in 1854 (something we discussed in the recipe for curried yaki-soba), we didn’t see large segments of the American public with a taste for Japanese food until around the 1950s. That has to do with the Army.

On August 14, 1945, Japan surrendered to the Allies. By September, General MacArthur was in charge of Occupied Japan as the Supreme Commander of Allied Powers (well, I guess when you’re already general, you need a heck of a title to consider it a promotion). By the end of 1945, there were 350,000 U.S. troops stationed in Japan, and while MacArthur initially forbade the troops to eat any of the scarce food the Japanese had, as Japan rebuilt, soldiers would go off-base to enjoy local cuisine. 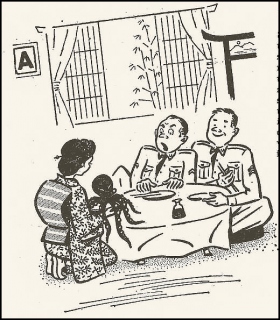 But choosing what to eat in Japan wasn’t as simple as you’d think. The October 9, 1952 edition of the Army’s Pacific Stars and Stripes warned not to eat anything raw (“Raw fish or ‘sashimi’ is a Japanese delicacy, but from it you may derive a parasitic infestation“), including pickled vegetables. And it helpfully included this illustration on the right, showing a private first class and a corporal having different reactions to octopus.

Instead, Pacific Stars and Stripes suggested Japanese beef, and had this advice about oyakodon:

While the formal occupation ended in 1952, U.S. soliders have been stationed in Japan ever since. Returning soldiers brought back a taste for oyakodon.

Mix sauce ingredients, chicken and black mushroom and cook until chicken is done. Add kamaboko and green onion and bring to a boil, then add beaten eggs to cover the pan (don’t stir). Cook for a couple of seconds and pour over four or five bowls of rice.