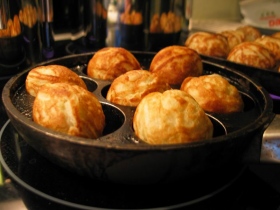 Aebleskivers (which, depending on who you ask, is supposed to mean “apple-shaped” or “apple slices,” the original filling, in Danish) look odd if you’ve never tried them. Their creation requires a special pan with rounded cups. A batter that’s basically similar to a pancake batter is poured in the cups.

Between the flipping, the shape of the pan, and the baking powder, the pancakes turn into round balls. If they’re not filled, they’re not quite as airy as popovers, but are eaten the same way, and in the same contexts (breakfast, dessert, or as a snack).

The legendary origin (which is to say, completely absurd and without any basis in reality) is that Vikings cooked cakes on their dented shields, and the batter pooled in the dents, creating aebleskivers.

There are some problems with that legend. Chief among them is that Viking shields were wooden. Attempts to use them as cooking vessels would achieve the invention of the Viking funeral, not aebleskivers.

Equally significant is that these pancakes have culinary relatives across Asia. In the South of India, they use a similar pan to make a usually spicy version called paniyarams; in Thailand, they use it to make a street food called kanom krok, a sort of rice and coconut cake; and in Japan, a they use the pans to make octopus-filled dumplings called takoyaki.

Unless I missed the day in World history where the Vikings visited Japan, I’m guessing the Vikings weren’t directly involved in this pancakes. (Although if anybody wants to work on a script for Vikings vs. Samurai, I’d love to watch that movie. Can someone get Jason Statham on the phone?)

The November 25, 1917 edition of the New York Tribune included an aebleskiver pan as part of their “Tribune Institute” selections of tested home economics products:

Beat egg yolks. Add sugar, salt, and milk; then flour, soda, and baking powder which have been sifted together. Last, fold in stiffly beaten egg whites. Place fall amounts of fat in each cup (called a munk pan) and fill 2/3 full of dough.

*Place a small tsp. of applesauce on top of dough; then barely cover with a few drops of dough, cook until bubbly, turn carefully with fork and finish baking other side.

Serve with butter, maple syrup, or jam. Sprinkle with powdered sugar after baking. (Can keep heated at low temperature in oven.)