A recipe that often became a nickname for the restaurant that served it. 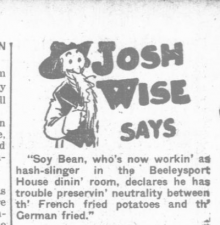 Have you ever heard of a blue plate special? The phrase, popular in the early and mid-20th century, dates to the late 19th century and refers to a low-cost meal with a protein, starch, and sides included in the price. (The phrase “no substitutions” is often associated with blue plate specials, as that was a common policy.) One of the most common blue plate specials was a meatloaf, mashed potato, gravy, and green bean dinner, served with coffee, though the phase could also refer to a turkey dinner or some other offer.

Hash is technically any conglomeration of meat, potato, and seasoning that’s fried till partially crisp. It’s the kind of thing home cooks were doing long before it had a proper name. It became a recurring favorite in diners because the constituent ingredients of a beef hash were the leftovers of the ingredients ordered for a meatloaf blue plate special. As long as the potatoes were mashed in comparatively small batches, the cooked meat and boiled potatoes ended up cutting down on prep time for breakfast the next day.

For a larger version of the scan, click here.

Remove all skin and fat. Then chop the meat. To the chopped meat add an equal amount of cold boiled potatoes. Season with salt and pepper and put into a hot, greasy frying pan and spread evenly.

Then place on the stove where it may slowly brown underneath. Turn and serve on hot platter.