Oct. 7, 2019 update: Y’know, I realize the site gets a lot of traffic from Pinterest, which I love and appreciate, but it has the side-effect of bringing in a lot of people who don’t totally understand the context of Yesterdish recipes. I try to fill in the blanks when I can, but since these recipes generally came to me through estate sales, I can’t very well get clarification from the source without a Ouija board.

That said, I had the opportunity to revisit this post today and compare it to recipes in newspapers. I couldn’t find the original (only reprints in recent newspapers, which I don’t want to clip for copyright reasons), but here’s the issues:

So, yeah, the original post discussed another form of Russian dressing unrelated to the recipe. Sorry for the confusion — the thing about Ouija boards is they kind of work on their own schedule. 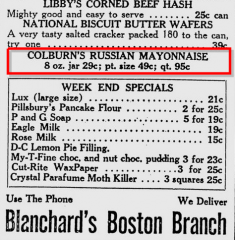 Russian dressing isn’t as fixed a recipe as most; it absolutely contains mayonnaise, and then either chili sauce or ketchup, and some combination of pimento, chives, onions, pickles, horseradish, and herbs. You’d think we’d have a better idea about the composition of a recipe with a 20th-century origin.

Russian dressing was invented in the 1910s by New Hampshire’s own James E. Colburn, a caterer and grocer. Colburn’s company produced mayonnaise, and the early labels for the dressing described it as Russian mayonnaise. The advertisement above appeared in the June 5, 1930 edition of The [Nashua] Telegraph.

So why the name? It’s tough to say. Lots of sources (including the Food Lover’s Companion) theorize that early formulations included caviar, an ingredient associated with Russia, but I’m skeptical of that, given that there isn’t a single recipe for such a dressing anywhere.

Place chicken breast in a 9 x 13″ baking dish. Mix the above ingredients together and pour over chicken.

Marinate overnight or a few hours, turning once.

Bake at 350 deg. for one hour. Remove to serving platter and spoon sauce over top.