Made with oyster crackers and ranch dressing mix.

Can you even envision a time before ranch dressing? And not just ranch dressing, but ranch “flavoring” in general. No ranch-flavored tortilla chips. No ranch dipping sauce for chicken strips or pizza crusts. It’s the most popular dressing in America, and it’s all of about 65 years old, give or take a couple years, and it didn’t come to mass market until nearly a decade after that.

There were buttermilk dressings before ranch, to be sure. Here’s an example from the June 13, 1927 edition of The Warren (Pennsylvania) Tribune:

Which is a fine dressing, but it’s not ranch. Ranch’s story starts in 1918, when Kenneth Henson was born in Nebraska. He and his wife Gayle would move to
Los Angeles by the 1940 census, where he worked in a metal processing plant.

Not exactly where you’d expect to find the creator of America’s favorite dressing, I grant you, but he hadn’t made it yet.

The recipe originated sometime between 1949 and 1952, when Kenneth Henson (who went by Steve when he came back, for the record) was spending 3 years on a work contract pretty far from Los Angeles. As quoted in the November 12, 1972 edition of the (Reno) Nevada State Journal: 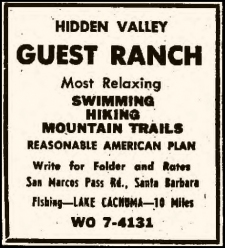 There were other “Hidden Valley Ranches” before the Hensons’, and there were other ranches operating in Hidden Valley contemporaneously (including one which, when limited to existing buildings that would hold only 25 guests, cleverly turned itself to a weight loss “resort” to the stars and charged $150 a week).

Although the guests were few, they loved Kenneth/Steve’s dressing, and word spread. The ranch ended up making money on the dressing mixes and losing it on the ranch itself. The Hensons sold some land to keep the ranch operating, and started selling pouches of prepared dry mix–just add buttermilk and mayonnaise–in stores. As the story goes, in the first local shop that sold the pouches, demand was so high that the owner thought his staff was stealing them.

The Hensons sold the ranch around 1970 and the Hidden Valley brand to Clorox in 1972, although Steve’s son stayed on to manage the factory, now located in Reno. With the increase in research and development funding and marketing dollars, Clorox was able to reformulate the pouches to use regular milk (instead of slightly-trickier-to-find-at-the-time buttermilk) and to develop a shelf-stable version that could last about half a year in the bottle.

(Click here to expand the back of the scanned recipe.)

Mix oil with crackers, then sprinkle in dry mixed ingredients. Bake on cookie sheet at 250 deg. for 10 minutes, then stir; bake additional 10 minutes.