The variety of cookie most famous under the Biscoff brand name. 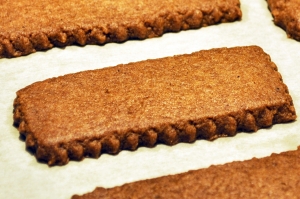 Strangely enough, this is a recipe that, with a slight modification, belongs both to my mother’s childhood in Eritrea and my own childhood in Cleveland. Not bad, considering the recipe in question is Dutch, Belgian, and German. But let’s talk about the cookies themselves before we get too far down memory lane to find our way back.

Speculoos (the name comes either from the Latin root for mirror or the Dutch word for spiced) are crisp shortbread cookies with a the warming collection of spices you might find in a pumpkin pie. Because the egg-free dough doesn’t rise very much, they’re traditionally used to make shaped cookies, and in particular, cookies stamped with wooden molds to create a reverse impression in the dough.

There’s speculation about the origin of the name itself; it’s thought to derive either from the Dutch word for spice (specerij) or the Latin word for mirror Latin word for mirror (speculos). I’d root for the latter, both because of the similarity of the terms and the literal mirroring of the stamp’s design into the cookie.

If you enjoy your coffee black, this is the perfect cookie for you: the spices are married to a caramelized sugar flavor that lingers in your mouth after every bite, sweetening your coffee as you drink it.

1960s: It Takes Three Speculoos to Drink a Cup of Tea

While the Dutch windmill cookies have been enjoyed here since the 1920s, the most famous iteration of this treat worldwide is the rectangular-for-dipping style sold under the Biscoff brand name, baked by family-owned Lotus Bakeries in Lembeke, Belgium. 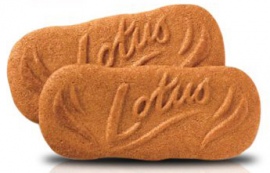 First sold door-to-door in 1932 by two brothers, the modern Biscoff biscuit is a slightly different formulation than the original recipe; it has less cinnamon and a bit darker brown sugar to enhance the caramel-like flavor.

In the 1950s, the bakery started packaging the cookies for individual servings (at the time, this meant three cookies, a fact that will become crucially important later on in this post) and selling them to cafes at cost to encourage their consumption with coffee. By the early 1960s, the brand called itself “Europe’s favorite cookie with coffee.”

The nuns in my mother’s grade school used these pre-portioned imports as part of a snack for the class. The class was offered either hot chocolate or tea. My mother always took the tea. And the three Biscoff cookies were part of an elaborate ritual of consumption. As I recall it–and I’ll update this section if she corrects me–it goes something like this:

Despite their long European history, Biscoff cookies didn’t make it to U.S. shelves until 2006 (although airlines served them as in-flight snacks since 1985). So when my mother came upon them recently, she settled in for a cup of tea… only to discover, to her horror, that the single-serving envelope she took from the larger package had only two cookies in it. She chalked it up to a manufacturing error.

But horror of horrors, the next package had only two cookies. And so did the next one. And the next one. As her ritual requires three, well, her choices were to unwrap all the packages and sort them into the triads for which the almighty had always intended them or to make her own and portion them properly.

She chose the latter. 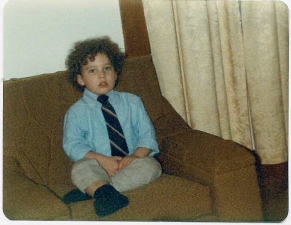 As a child in the 1980s, I didn’t do much air travel, so I didn’t grow up with Biscoff’s rectangular coffee-paired cookies.

But I did grow up with speculos; windmill shapes like these. They aren’t quite as caramelized or as crisp, and the flavors are somewhat more muted, but they’re every bit as good–just a little bit less useful if you’re looking for something to stand up to coffee.

The ones we got in bulk from the local grocery store were studded with slivered almonds, which added a kind of secondary crunch to the already crisp cookie; if you’ve ever had a Virginia peanut, it’s that same effect of biting into something and having it shatter twice. Incredibly satisfying, if you’re a crunch enthusiast (and I am).

Anyway, at this time, my father would occasionally make home movies with his video camera where he’d ask my sister and I questions while we sat on the couch as a two- and three-year-old, respectively. We’d sing the alphabet song, talk about Sesame Street, that sort of thing. Certainly this was part of a plan to humiliate us in adulthood; little did he realize that Dori and I would grow up to make fools of ourselves pretty much all the time without any help. 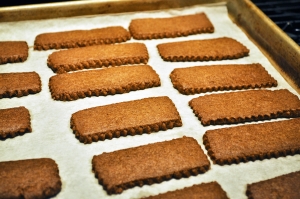 One of those questions was about my favorite kind of cookie. As a three-year-old, I’m guessing I didn’t know the word speculoos, and at the time, the word windmill was out of reach from my memory. So I tried to describe my favorite cookie. I held my hand up, tapping the thumb against the ring finger (because the cookies were hard) and, peering out from beneath a curly mop of hair, I explained, “I like sqwuare, cwunchy cookies.”

For years afterward, my family insisted that there wasn’t such a thing as cookies that were square and crunchy… until about 2003, when I saw a windmill cookie and made the connection.

(Well, fine. They’re rectangles, you jerks. You know your shapes better than a three-year-old. You must be so proud.)

So what about this recipe? Well, we’re coffee enthusiasts, so the speculoos we make try to emulate the stronger, spicier flavor of the Biscoff brand. If you enjoy your coffee black, this is the perfect cookie for you: the spices are married to a caramelized sugar flavor that lingers in your mouth after every bite, sweetening your coffee as you drink it.

While you have the option to uphold the tradition by stamping something into your cookie (images, words of love and encouragement, curiously polite death threats–your baking needs may differ from mine), cutting them and baking them works just as well for a cookie too good to waste time reading.

Mix all ingredients above.

Once your butter and sugars and vanilla are incorporated, add the “spiced flour.” Mix until it is a dough. Roll to 1/4 inch thick.

Cut in shapes (we like long rectangles for dipping in tea or coffee).

[Note: that’s a version you’d have to keep in the fridge. If you want to emulate the shelf-stable kind, take your baked cookies, put them in a blender, and pour vegetable oil into the running blender until you have a smooth paste.]